Are you looking for the best road trips in Europe for your next holiday?

As a continent with some of the most visited tourist destinations in the world, it is vast and offers visitors plenty to see and do. Exploring it is on ‘anyone’s bucket list. But how do you make the most of your holiday? This post lists down some of the best European road trip ideas that you can start with.

You have the option to fly in and out of specific countries, but you can also explore the continent by land. With 17 landlocked nations, going on a road trip makes a lot of sense.

This also means you need to create a European road trip planner, complete with directions and travel time so that you can manage your tour wisely.

Read through this article to build the best itinerary possible. We listed down distances, driving times, and other essential information you need. Although not exhaustive, it has the details you can build on for a fun and well-planned driving holiday. So, ‘let’s get driving!

Stretching along the coastline of Salerno Gulf’s northern coast, the Amalfi Coast in Italy provides holidaymakers tons of options to see during their road trip.

What makes it attractive is its natural and cultural wonders, with a dramatic coastline that makes for an impressive drive and road trip. The twin bays Salerno and Naples are a significant draw.

A drive through the Amalfi Coast starts from Rome and ends at Tivoli or back to Rome if you prefer to drive full circle.

The entire road trip can last for nine hours and 36 minutes over a distance of 717.8 km. It can be longer if you wish to linger at scenic stops.

Read our other guides on other Italian cities: Things to do in Florence, Venice, Pisa, and Bologna

Berlin and Munich are two of Germany’s best cities that many tourists have to stop and think about which city to visit first. Either way is perfect.

Berlin is known for its edgy and liberal spirit, while Munich is more laid-back and offers copious amounts of brews.

The former is also famous for its arts and architecture, while the latter is famous for Oktoberfest. So, if you’re into sampling different German brews, head to Munich.

You can drive from Berlin to Munich in nine hours and four minutes, covering 584.5 km via A9. 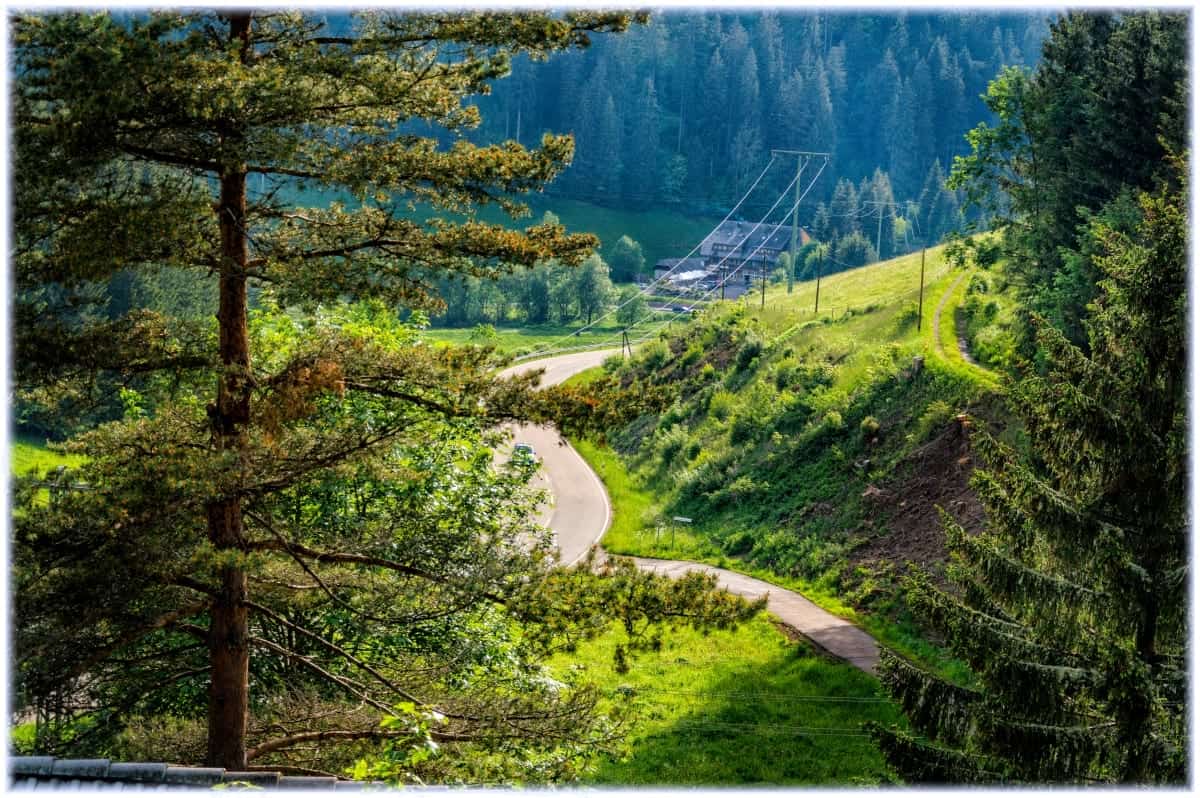 The Bundesstraße 500 is a federal highway in Germany that is intended mainly as a tourist road. What makes it one of the best road trips in Europe is the heights of the Black Forest that you can traverse in a north-south direction.

Route 500 has two road segments, with a gap in between that has yet to be closed. The route from Freudenstadt to Baden-Baden stretches 55.9 km via B294 and B462 and can be covered in one hour and a minute.

The section from Triberg to Waldshut, on the other hand, has a distance of 89.8 km via B33 and B314 and can be driven through in one hour and 20 minutes. Driving time will vary with traffic.

Edinburgh and Inverness are two popular routes to the Highlands if you wish to take a Scotland road trip. Going from one city to the next covers a distance of 251.22 km via A9, with a driving time of three hours and one minute. Edinburgh is Scotland’s second-largest city, while Inverness is smaller in comparison.

The former is home to many glamorous historical structures, including the Edinburgh Castle. Despite its size, the latter is just as rich in sightseeing delights and unique activities such as Loch Ness monster spotting. Better get your car ready for a fun, scenic drive.

Read our guides about Scotland: Islands in Scotland

Among the popular routes for the best road trips in Europe, Grossglockner Hochalpenstrasse or the Grossglockner High Alpine Road in Austria is the most exciting. After all, it is the highest surfaced mountain pass road and boasts of winding curves and a hairpin turn near the summit.

It has also been featured in the men’s annual multiple-stage bicycle race Giro d’Italia. Your adventurous drive will start at Bruck in the Salzach Valley through the Ferleiten in just an hour and a half over a 48-km distance. Short enough to drive through over and over again, right?

Located in Country Kerry in Ireland, this scenic drive runs around the Iveragh Peninsula. Along the 179km-long, circular route, you will see coastal landscapes, seaside villages, and other attractions, including the rocky island Skellig Michael with a long-abandoned 7th-century Christian monastery.

The Ring of Kerry stands out as one of Ireland’s most scenic drives. It starts at Killarney and ends at Glenbeigh, before returning to Killarney via the N72.

Drive non-stop, and you’ll complete the route in 3.5 hours. But it would be such a crime not to stop and enjoy the Killarney National Park and other wonders along the way.

Helsinki is Finland’s capital and most populous city. It sits on a peninsula in the Gulf of Finland and is known for its parks and islands. It is also home to the famous Temppeliaukio Kirkko, an underground church that has been carved into the bedrock.

Lapland, on the other hand, is located in the northernmost region of Finland and is frequently visited for its ski resorts, subarctic wilderness, along with the Northern Lights and the midnight sun.

Also, don’t miss out on all the possible castles you might see along the way – read our guide about castles in Finland.

Also known as Route 1, the Ring Road is a national road that runs around the island of Iceland and connects most of the ‘country’s inhabited parts.

These include the glacier lagoons of Dyrhólaey and Jökulsárlón and the waterfalls of Seljalandsfoss and Skógafoss. Given the distance to cover, you need to plan for at least a 7-day road trip in Europe to truly enjoy the Ring Road.

Home of the famous Eiffel Tower, Paris is a major city in France and Europe that many tourists flock to year after year. Berlin, Germany, on the other hand, has a history that is in contrast to the romantic image of Paris.

Both cities, however, are worth visiting for many reasons—art, culture, history, and tons of attractions worth a spot or ten on Instagram. They also provide the best route for a European road trip with breathtaking views along the way.

Whether you start in Paris to Berlin or vice versa, you’ll have an awesome time driving the entire length of 1,054.1 km via A2 for 10 hours and 52 minutes or more, depending on your pace.

Catalonia – The road to the sun, Spain

Located in northeastern Spain, the Catalonia region covers an area of 32,108 km² and includes the provinces of Barcelona, Lleida, Girona, and Tarragona.

It is known for many things but, most especially, for the picturesque Pyrenees Mountains and the stunning beach resorts of Costa Brava.

A road trip out here isn’t just for the view. You should also visit to sample the region’s famous dessert Catalonian Cream. Driving time will vary on the route you want to take.

Interested in other cities in Spain? Check out also some other day trips from Barcelona or visit the island of Mallorca.

Want to go on a road trip around Croatia? Explore the best it has to offer when you drive from Dubrovnik to Pula or vice versa.

For seven days or so, drive over 1,100Km, visiting Krk, Zagreb, Plitvice, Zadar, Krka, Split, Bol, and Makarska in between.

Each place has amazing attractions to explore, such as the world’s sixth Largest Roman Coliseum in Pula, and lots of activities to do, such as hiking and waterfall diving in Plitvice Lakes National Park.

You can shorten your trip to seven hours, but ‘where’s the fun in that? ‘Don’t miss out on the opportunity to truly stop and savor the moment.

This is also known as the Atlantic Ocean Road, this covers a section of County Road 64, stretching 8.3 km and running through an archipelago in Norway.

This means the route runs along bridges, causeways, and viaducts that connect small islands and skerries.

‘It’s no wonder that it’s Norway‘s high scenic drive. It is also one of the 18 National Tourist Routes.
Designed for road trips, there are several viewpoints and resting places along the way.

It takes two to three hours to reach the mainland from the start of the road at Utheim on Averøy.

Also, make sure to read our other posts about Norway – click here. Plus, we also have an amazing guide about all the castles in Norway you might come accross!

Some of its highlights include the Vikos Gorge, Acheron, Lake Ioannina, and Vikos National Park. As Greece’s best-kept secret, it’s one of the great road trip destinations in Europe.

One of the best routes is along the Mountains of Zagori, starting at Ionia Odos (Motorway 5) and up to the village of Tsepelovo. Prepare to spend at least ten days around Epirus, visiting its natural wonders, monasteries, and so much more.

We also have other guides about other cities in Greece, read it here: Things to do in Athens, Rhodes, and Santorini

Montenegro spans 13,812 km², which means ‘there’s plenty of ground to cover if you want to drive from one end of it to another. But take the Budva – Kotor – Durmitor – Piva route and maximize your trip without missing out on the good stuff.

Along the way, enjoy the sandy beaches and nightlife in Budva, then explore the Bay of Kotor, Durmitor National Park, and Tara river, and visit Ostrog Monastery in Piva.

Drive through these places in less than four hours over a total of 261.4km. Beware of the narrow switchback sections of the road.

If you’re interested to see more of the Balkan countries, check out our detailed itinerary how you can spend your holidays around this area.

Located in central Italy, Tuscany is among the best places to go on a driving holiday in Europe. While it’s famous for its arts, it also boasts of rolling green fields, delicious wines, and ancient cities. Start driving in Florence and reach Pistoia in approximately eight hours via Poppi, Arezzo, Siena, San Gimignano, Livorno, Pisa, and Luca, covering 432 km.

Along the way, you’ll get to sample wine at Poppi, experience Livorno’s Ligurian Coast, and take a cheesy tour in Pisa and stock up on cheese-themed photos. For the authentic Tuscan experience, you should also stop at Volterra along the way. Taking the ultimate European Road Trip.

When planning a driving holiday in Europe, ‘it’s essential to be prepared. While ‘it’s exciting to wing it, long-distance travels require a different approach to planning to ensure safety and fun.

So, get stuck in the middle of nowhere, drive only one of the best cars for road trips in Europe, and nothing else. Choose one ‘that’s built for such a demanding holiday on the road.

Read also: Day trips from Rome, Florence, Bologna, Pisa, and Venice as some of these cities are super close to Tuscany! Also, don’t miss out on some of the beautiful castles in Italy you might come accross during your road trip.

877 shares
How to Buy Gifts for People Who Love to Travel
← Previous
Christmas Gift Ideas: Top 10 Travel Gifts for Her
Next →