Top 10 BEST Things to do in Ljubljana (Slovenia)

The name Ljubljana first came out in the history in the 12th century, during which the Habsburg ruled the area, but actually, the history of the settlement dated earlier from that. In the antiquity period, the area now known as Ljubljana used to be the site of an ancient Roman city called Emona.

Some people think that the best time to visit Ljubljana is during the summer because of the reliable and friendly weather and the festivals being held during the season. However, if you are looking for a less crowded city, the best time to go to Ljubljana will be from April to May and from September to October. During these months, the weather is still pretty much enjoyable, but the city is much less crowded, and the rates of the hotels in Ljubljana are much lower.

Read more and find out what are the top things to do in Ljubljana.

Top 10 Things to do in Ljubljana (Slovenia)

One of the most famous Ljubljana tourist attractions is The Dragon Bridge. The iconic Ljubljana bridge initiated in the year 1900 and needed one year to finish. The Dragon Bridge, or in Slovene it is called Zmajski most, was built to replace an old oak bridge named Butcher’s Bridge that was severely broken during the massive earthquake that happened in 1895. A

t first, this replacement bridge was named The Jubilee Bridge of Emperor Franz Josef I, but in July 1919, it had its name changed into the Dragon Bridge.

Spanning for 33 meters across the Ljubljana River, it connects Kopitar Street and Ressel Street. There are four big dragon statues on each corner of the bridge, and if you look carefully, you will find another 16 smaller dragon statues used as decoration to the bridge. According to Ljubljana urban legend, these dragons will wag their tails if there is a virgin crossing the bridge.

Standing on the hill in the middle of the city is the Ljubljana Castle, which is known as the gem of the city. Originally built as a stone and wooden fortress in the 11th century, this Ljubljana landmark has gone through many phases. The government finally bought it in 1905, but the total renovation of the palace did not take place until the 1960s. The repair took more than 35 years to go.

Well-kept and landscaped, now Ljubljana Castle has attracted many tourists who take a trip to Ljubljana. Surrounded by a beautiful garden where you can take a relaxing stroll, the castle houses several exhibitions that will attract people from different ranges of age.

You can learn the history of Slovenia, know more about the puppets, and many other exciting displays are available.

You can also join the guided tours in Ljubljana Castle.

This might interest you: Top 18 Pretty Castles in Slovenia to Visit

Another famous Ljubljana point of interest is the Ljubljana Cathedral, or more popularly known as the St. Nicholas Church. This impressive church was built in 1706. Called merely as The Cathedral the church was originally built in Gothic style, but it was rebuilt in the early 18th century as a breathtaking Baroque-style cathedral.

One of the well-known features of St. Nicholas Church is the green dome and the twin towers that can be seen from all over Ljubljana. Another feature that makes this church as one of the most beautiful places to go sightseeing in Ljubljana is the sculptured bronze door.

This door was added in the 1990s to welcome Pope John Paul II. Located in Methodius Square, St Nicholas Cathedral can be reached easily from any point of Ljubljana.

→ Where to stay: Best hotels in Ljubljana, Slovenia 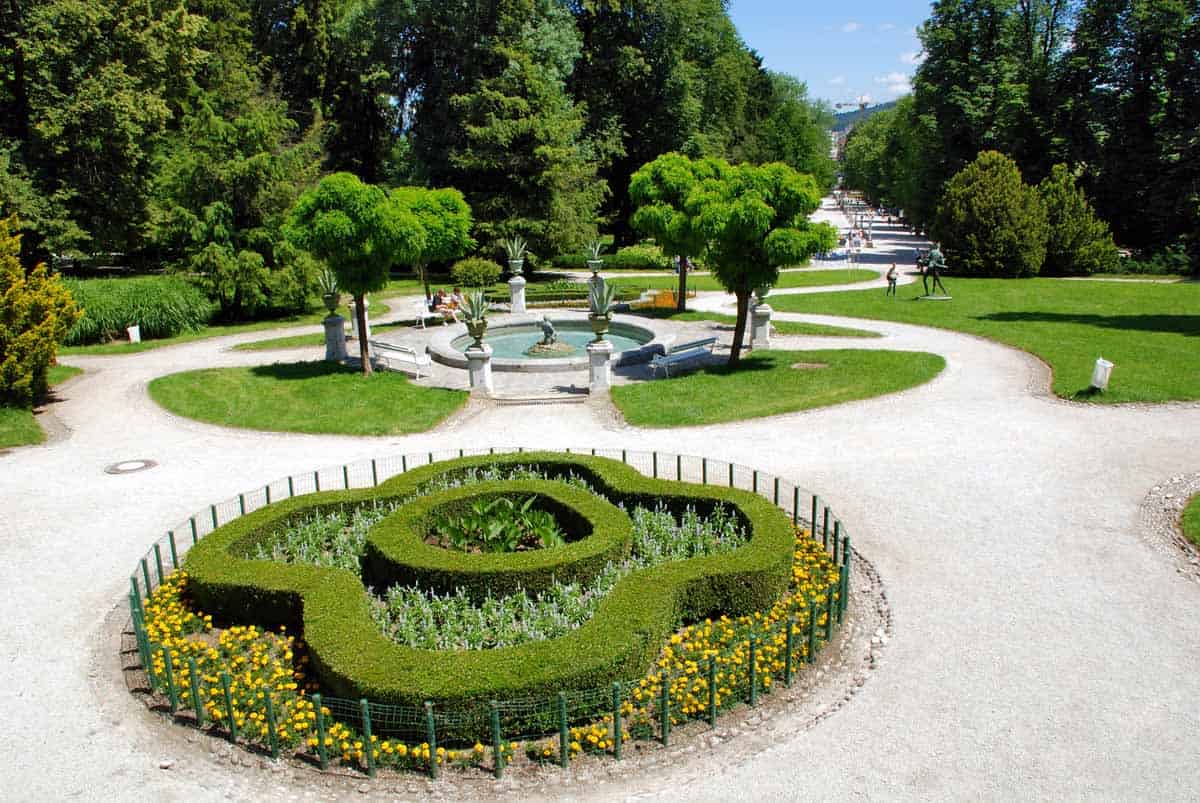 Enjoy A Sunny Day Out

Inside Tivoli Park, you will find the fantastic Tivoli Castle. At first, this building was meant to be the place for the Jesuit monks. It was built in the 17th century. The present architecture is the result of the renovation done in the 19th century conducted by Marshal Joseph Radetzky.

Some other architectural landmarks found within the park are Cekin Mansion and Tivoli Hall. Cekin Mansion is the home of the Museum of Contemporary History of Slovenia, while Tivoli Hall is a complex of multipurpose indoor arenas.

If you love watching mesmerizing plants, you can head to the greenhouse run by the Ljubljana Botanical Garden that houses many species of tropical plants. There is also an impressive rose garden that lies in this Ljubljana tourist attraction.

Read also: 25 Beautiful Castles in Europe That Would Inspire Your Wanderlust

Buy Something to Remember

There are plenty of things that you can buy in the Central Market. Tens or even hundreds of stalls selling fresh produce with the best quality, and on Wednesdays, there is an organic produce market during which you will have plenty of choices of fresh organic fruits and veggies.

Don’t forget to taste some of the best homemade cheese, olive oil, and wine here. If you have a sweet tooth, the Central Market will be your paradise because there are plenty of sellers here selling freshly baked bread, cakes, cookies, and other baked goods.

Not only fresh products and food and beverages goods, but you can also buy Slovenian crafts, such as wooden souvenirs, blankets, and other things that you can have as a keepsake of your magnificent journey in Ljubljana.

Cross The River And Visit a Different Kind of World

Triple Bridge can be considered as the most crucial bridge in Ljubljana. Not only that, it has a unique shape that distinguishes it from other bridges in the world. In the past, there was an old wooden bridge that had a very significant role in connecting south-eastern Europe and the Balkans with the north-western European lands.

Since the medieval bridge was considered to be outdated and worn out, in 1842 the government decided to build a new bridge which is now called the Triple Bridge. When it was first made, this bridge only consisted of one single bridge. The side bridges were added in 1929. It took three years for the completion of the construction.

Read also: Top 17 Most Beautiful and Best Lakes in Europe to Visit

Sleep Behind The Bars

If you are looking for one of a kind activity in Ljubljana, you should go to one of the unique hotels in Ljubljana, Hostel Celica. This Ljubljana hostel used to be a military prison from 1830 to 1991 when Slovenia declared its independence. The Students Organisation of Ljubljana turned this ex-prison into this youthful hostel in 2003.

They transformed the cells into these small rooms that are comfortable, but you can still feel the prison atmosphere in it. The prison bars were not taken away to give the apartments their unique vibes. The renovation took two years to complete.

Not only a lodging place, but Hostel Celica also has an art gallery and a bar in which you can enjoy some great live music from local and international musicians. 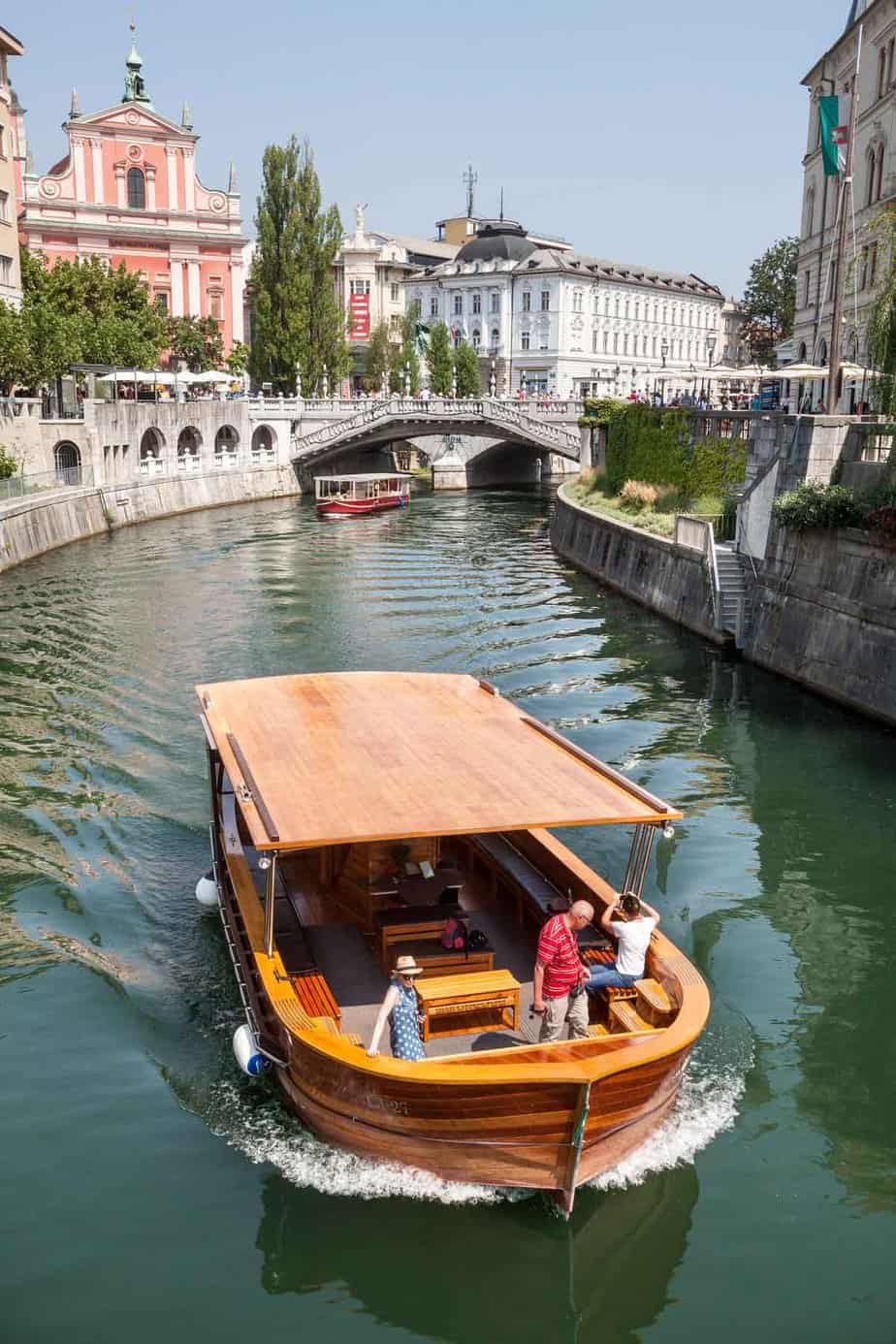 There, you will find this simple but beautiful wooden boat called Ljubljanica. This boat will take you on an exciting river cruise in Ljubljana for about an hour.

Ljubljanica can carry up to 48 passengers, and it leaves every hour from 10 AM to 8 PM. You can also rent Ljubljanica for private events. You can order on-board catering and entertainment to make your parties more exciting.

Please note that this Ljubljana river cruise is only available from April to September each year.

Where to stay: Best hotels in Ljubljana, Slovenia

Educate Yourselves in The Fun Way

Slovenian Museum of Natural History is one of the best places to visit in Ljubljana. Their displays are some of the most exciting things to see in Ljubljana.

It will be a great place to learn more about the history of mother nature, especially if you bring your kids when you visit Ljubljana. It is located in the Central District of Ljubljana, not too far away from Tivoli Park.

Slovenian Museum of Natural History opens every day from 10 AM to 6 PM. It operates at longer hours every Thursday. On that day, the museum closes at 8 PM.

Enjoy free entrance for every visitor on the first Sunday in each month.

Looking into visiting Europe around spring? Slovenia is a Nice place to visit around this time of the year! You can also check out our other recommendations in our Spring in Europe posts.

Cycle Away from The City

Ljubljana has been long known as a city that is cyclist-friendly. The bicycle is one of the most favorite means of transportation in this capital city of Slovenia. And because of the streets that are comfortable for cyclists, exploring the city on a bike is one of the most fun things to do in Ljubljana.