Top 10 Things to do in Vienna (Austria)

Find out all the best things to do in Vienna for first-time visitors! We have compiled the top tourist attractions in Vienna you must not miss when you visit. Plan your trip now and read this post for more information!

Vienna is the capital, and the largest city in Austria, with more than 1,7 million residents. Vienna is the cultural, economic, and political center of Austria and one of the top places to visit in Europe.

In the heart of Europe, one of the most beautiful European capitals and the most romantic destinations in Europe lies on the banks of the Danube.

There are so many things to do in Vienna, from visiting palaces and museums to tasting some amazing food and enjoying the true spirit of European cities. Even though Vienna is a renowned city in the world, it still is one of the off the beaten path destinations.

There are various things to discover in this city that will make you fall in love with it and want to move there right away. Vienna is maybe the best choice for a weekend getaway in Europe.

Experiences and top things to do in Vienna

One of the things to do in Vienna is visiting one of the most beautiful palaces I’ve ever seen- Schönbrunn Palace. It is the former imperial summer residence. This palace had been Habsburg’s residence from the 18th century until the end of World War I. After the end of World War II, since the 1960s, this palace has become a museum and one of the most visited tourist attractions in Vienna.

During the 17th century, Empress Maria Theresa built Gloriette, the triumphal arch, on the 60 meters high hill above the palace. The view from this point of the castle is one of the most picturesque places in Europe. This view took my breath away!

Be sure to visit the labyrinth and the oldest zoo in Europe, founded in the 18th century that are part of this palace. Schönbrunn Palace is on the UNESCO World Heritage Site list.

It is a special place in Vienna and one of the most popular tourist attractions. This building is a unique artwork and one of those fantastic places to visit in Europe.

In this building, there are 52 apartments and four business spaces, 16 private terraces and three common terraces on the roof. On the terraces and the rooftop, there are more than 250 trees and bushes. The city of Vienna owns Hundertwasserhaus.

I was impressed by the beauty of this extraordinary building, and it is one of the places you must visit in Vienna. If you are a true art admirer, Hundertwasserhaus is what you need to see in Austria. 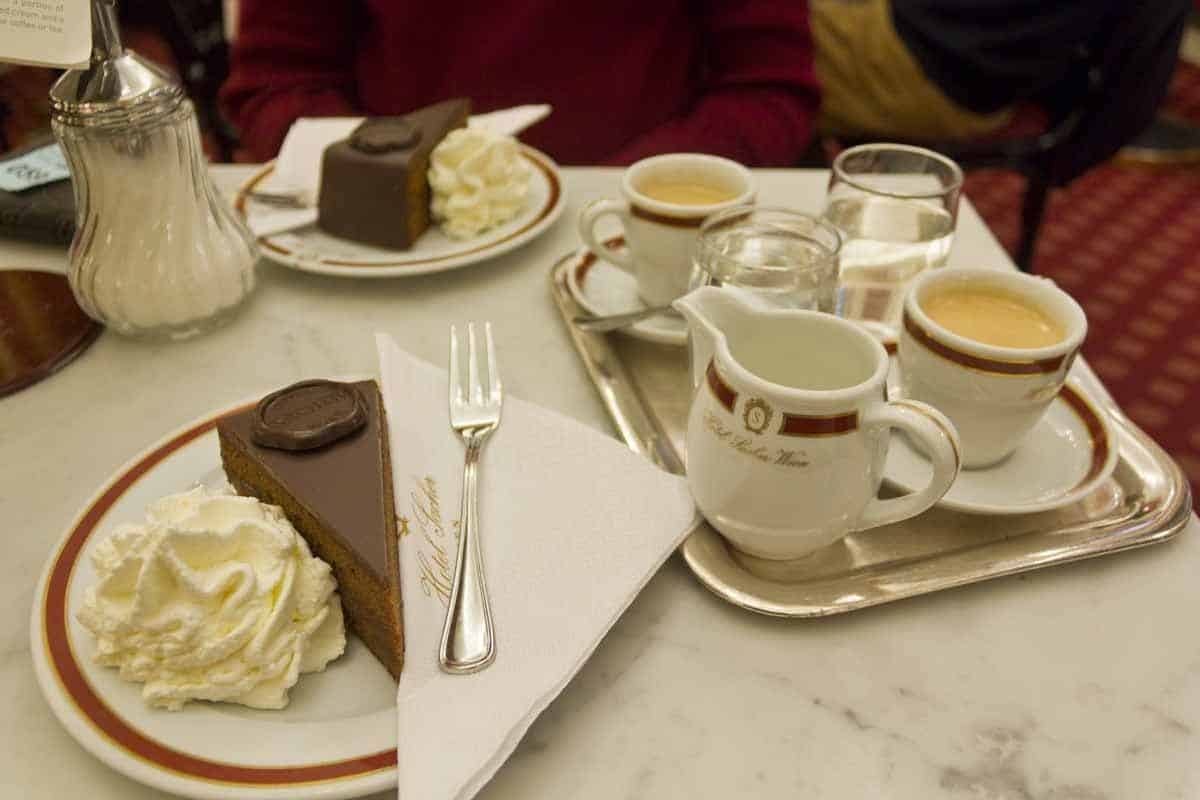 Austrian cuisine isn’t the most popular cuisine in the world, but it’s unquestionably delicious. There are so many dishes to try. Do this, and you will see the best of Vienna. For lunch eat the most famous Austria dish, Wiener Schnitzel. When you eat it, you will be so full, that you are going to need a walk. Therefore, enjoy your meal and continue your exploration of this city. Tasting this dish is one of the best things to do in Vienna.

For the end of your gastronomic tour of Vienna, have a dessert. I have two suggestions for you. Where to go in Austria if you want to eat fantastic ice cream? Go to Paolo Bartolotti Gelateria. This ice cream shop is owned by an Italian family and is the most popular place in Vienna and maybe in entire Austria.

If you are in a mood for cake, well I think you know where you need to go. Sacher cake is one of the landmarks of Vienna, together with Mozart chocolate balls. One of the best places to visit in Europe for a piece of cake is Hotel Sacher in the center of Vienna. The founder of this famous hotel invented the Sacher cake, and today it is one of the most famous cakes in the world.

Have fun in Prater

When you visit all the palaces and museums, it’s time to have some fun! Prater is a large public and amusement park in Vienna’s 2nd district (Leopoldstadt). The landmark of this park is the Wiener Riesenrad Ferris wheel. Visiting this park is one of the best things to do in Vienna.

You will feel so amazing taking all these wild rides and spending the most memorable moments with your friends. Vienna is also one of the best holiday destinations in Europe, because of this park. Children will love Prater for sure!

What to see in Vienna first is the real question when we are talking about this city. Hofburg Palace is the first place you should visit here. Hofburg Imperial Palace was an official seat of the Habsburg royal family.

The palace is placed in the center of Vienna, along with the outstanding Ringstrasse, ending at Josephplatz and Michaelerplatz.

The construction of this residence began in 1279. This building was a winter palace for Habsburgs until the end of World War I in 1918. Walking between the walls of Hofburg you will feel and see the wealth that once had the Austrian-Hungarian Empire. Therefore, it is considered to be one of the prettiest palaces in Europe.

Today, the new wing of the castle, Neue Burg, is the seat of the Austrian president. In Hofburg are located 22 museums such as Sisi museum, Imperial apartments, the imperial treasury. As a part of the Hofburg Palace, you can visit the Spanish riding school, famous for its Lipizzaner ballet.

Hofburg Palace and all the others that are situated in Vienna witness that this city had an important role during the centuries and it’s one of the essential historical destinations in Europe.

Have a cup of coffee in famous Viennese cafés

At the beginning of your day, I suggest you have a cup of coffee at one of the famous Viennese cafés. The best places to visit in Vienna are Café Central, Demel, Café Hofburg or Café Landtmann.

They are known to be the first cafés ever open in Europe, and they have created the Viennese lifestyle and image.

This ritual of first-morning coffee is one of the best things to do in Vienna for the start of a beautiful day.

When you think what to see in Vienna, the first thing that comes to your mind is one of the city’s most recognizable symbols, St. Stephen’s Cathedral.

This Roman Catholic church is situated in the Stephansplatz. It is the most important religious building in Vienna.

The construction of this cathedral started in 1147 and finished in 1160. Stephansdom is 107 meters long, 70 meters wide and 136,7 meters high. Here are buried the most influential Austrians like Prince Eugene of Savoy and Frederick III, Holy Roman Emperor.

This cathedral is also known for its multi-colored tile roof.

In the third Vienna district, on the Landstrasse, there is one of the most beautiful castles of Europe and one of the most important places to see in Vienna! Belvedere is a baroque palace with breathtaking gardens, made as a summer residence for Austrian Prince Eugene of Savoy, in the 18th century.

Upper Belvedere was built as a majestic gate of the Belvedere garden and is designed for maintaining receptions or events. These gardens are typical French baroque gardens with numerous trees and flowers and impressive fountains.

This palace and its gardens are what you need to see in Europe. During the day, you can see a lot of people and residents of Vienna walking around the parks, running, relaxing on the lawns and spending some quality time with their friends and family.

It is the oldest church in Vienna, founded in the 4th century, but today’s appearance is from the beginning of the 18th century. It is one of the most beautiful churches here and undoubtedly something that you need to visit in Vienna.

Thanks to this street, this city is known to be the best city in Europe for shopping. In this street, you can find all sorts of brands, those cheaper and those more expensive ones. You can spend hours walking from store to store and spending your hard-earned money.

In Mariahilfer Strasse, you can always find discounts and buy something with good quality for less money. So, for all of you passionate shopper, this street is one of the best places to visit in Austria.

Karlsplatz is one of the most frequented squares in the city and here is located one of the most prominent churches in Vienna, Karlskirche. In front of it, there is a water pool with a sculpture by Henry Moore.

Besides, the Karlskirche here is located at other essential Viennese institutions like the Vienna Museum (formerly the Historical Museum of Vienna) and Vienna Technical University.

One of the best things to do in Vienna after the whole day of walking and exploring is to sit down by the water pool and look at the people, start talking to local people and relax.

→ Check out these activities in Vienna

215 Shares
Share via
Facebook
Twitter
LinkedIn
Mix
Pinterest
Tumblr
Skype
Buffer
Pocket
VKontakte
Xing
Reddit
Flipboard
MySpace
Delicious
Amazon
Digg
Evernote
Blogger
LiveJournal
Baidu
NewsVine
Yummly
Yahoo
WhatsApp
Viber
SMS
Telegram
Facebook Messenger
Like
Email
Print
Copy Link
Powered by Social Snap
Copy link
CopyCopied
Powered by Social Snap
We use cookies to ensure that we give you the best experience on our website. By accepting this, you're giving us permission to use your data to improve our user experience. If you have further questions how we use your data, please read our disclaimer and privacy policy for more information.I acceptRead Disclaimer