Top 10 BEST Things to do in Krakow (Poland)

Krakow is located on the banks of the Vistula River. It is the architectural, historical and cultural jewel of Poland. With more than 760 000 residents in the city and 1,4 million residents in the broader city area, Krakow is the second-largest city in Poland.

Krakow is the city of young people, students, with great nightlife and parties. The best time to visit this city is in the fall or the spring. There are numerous hostels and hotels in Krakow to choose from for your stay here. You will be fascinated with the incredible combination of historical and vibrant, youthful parts of Krakow.

According to legend, Krakow was founded by the duke Krak, who killed a dragon here. This city officially became the Polish capital in 1038 and kept this status during the 11th century. Krakow was the first European city that was included in UNESCO’s list of World Heritage sites because of its historical importance, beautiful architecture and the fact that it has kept the same appearance for centuries. The historical center of the city, the Old Town, Kazimierz, and Wawel Castle, were added to this list in 1978.

Although it is considered to be an underrated destination in Europe, Krakow is the city of nightlife, great parties especially for New Year’s Eve, but also the city of history and culture. Sure, you should come here and have a great time, but while you are here, visit some remarkable historical sites and learn about Polish and European history. This holiday will make you not just a better traveler but also a better human being.

Visiting Krakow and especially Auschwitz will leave a strong impression on you and make you remember it for the rest of your life. If you thought if you should visit Krakow, here is our list of things to do in Krakow.

Top 10 Things to do in Krakow (Poland)

The Old Town is one of the things you must see in Krakow. This part of Krakow entered on the UNESCO list of World Heritage Sites in 1978. It consists of the historic Kraków Old Town, as well as the Wawel castle, Nowe Miasto (“New Town”), Nowy Świat (“New World”), Kleparz, Okół, Piasek, Stradom, and Warszawskie.

All the top things to do in Krakow start from this point, the main city square. The main city square, or Rynek Glowny, is part of the Old Town and the most prominent European medieval city square with the 40 000 square meters big pedestrian zone. It dates back to the 13th century and is surrounded by historic townhouses and churches.

In the center of the main square, there is settled Cloth Hall, and on one side of the cloth hall, there is the Town Hall Tower and on the other, the Church of St. Adalbert from the 10th century.

At the square, you can also see Adam Mickiewicz Monument from 1898. One of the symbols of this square and the entire city is the Gothic towers of St. Mary’s Basilica.

Going on a walking tour to explore some of the things to do in Krakow is highly suggested. As you probably know, you can find these fantastic tours all over Europe.

Krakow is one of the cities that can offer this kind of experience to the tourist. Tours start from the main city square and the most important they are free. At the end of the trip, if you liked it, you can leave tips for the guides.

Be sure to add this activity to your list when you are planning your trip to Krakow. By taking this tour, you will be able to see all the essential sites and find out more about Krakow.

Read also: Top 11 Things to do in Warsaw

The Wawel Castle is a royal residence built during the rule of King Casimir III the Great, who reigned from 1333 to 1370. This castle is considered to be one of the most important historical and cultural sites in Poland. Wawel Castle was the residence of the kings of Poland for centuries.

Nowadays, this is one of the best art museums in Poland. This museum was founded in 1930 and had a remarkable collection of Italian Renaissance paintings, prints, sculptures; the Sigismund II Augustus tapestry collection and the most extensive collection of Ottoman tents in Europe.

The museum is also a vital restoration center for works of art in Poland.

One of the most magnificent buildings on the main square is the Church of the Virgin Mary. This brick Gothic church was built during the rule of Casimir III the Great and was completed in 1347. The church was re-built in the 14th century and adjacent to the main market square. The church is 80 m tall. It is known for its wooden altarpiece carved by Veit Stoss.

On every hour, a trumpet signal is played from the top of the taller of St. Mary’s two towers. This sound is played in memory of the trumpet from the 13th century who was shot in the throat while he was trying to warn residents Mongols are coming to conquer their city.

Read also: Top 6 Places to Visit in the Czech Republic

Kazimierz is the old Jewish community in Krakow. It’s located near to the Old Town. Kazimierz was an independent city during the medieval ages and had a Christian quarter in the west and Jewish quarter in the east. It was founded in 1335 by Polish king Casimir III on an island on the Vistula River. By the end of the 15th century, the Jewish community became an essential part of this town.

Here you can see the Old Synagogue from 1557 and the Jewish cemetery from 1511. Kazimierz developed into one of Krakow’s districts in 1791. During World War II, in 1943, all Krakowian Jews were forced to move to the ghetto based in Podgórze and later transported to concentration camps. The Nazis killed about 90 percent of the Jewish population of this part of the city.

After the war, this has become a poor area and gained the reputation of the “bad neighborhood”. From the nineties, this area of Krakow wakes up from sleep. The city renovated old synagogues and new galleries, cafes, and clubs gave an original, fresh appearance.

Nowadays, you can find here numerous cafes and restaurants but also a place on Starowiślna street where you can taste the best ice-cream in Krakow. Visiting this city area is one of the cool things to do in Krakow.

Did you watch Steven Spielberg’s movie “Schindler’s List”? It is a true story about a German man, a member of the Nazi party, businessman, Oscar Schindler, who saved 1100 Jews from the Nazi camps.

If you have already seen it, then visiting his factory will surely be on your sightseeing list. Visiting the place where all the “Schindler’s Jews” worked, is one of Krakow’s points of interest.

This city has suffered a lot during World War II, and especially its Jewish citizens. Just 50 kilometers from Krakow the most prominent Nazi concentration camp for mass destruction of the population, Auschwitz is settled. More than 1, 3 million people were deported here from all over Europe. In this “camp of death,” more than 1, 1 million people were killed: 1 million Jews, 19 000 Roma, 83 000 Poles and 25 000 people of other nationalities.

Most of the people who were brought here were killed right away in the gas chambers of the Auschwitz II ( Birkenau) by using the gas Cyclone B. The rest of the prisoners died of starvation, forced labor, uncontrolled epidemic, in medical experiments or were executed. The camp commander was Rudolf Hess, who said during his trial that in Auschwitz more than 2,5 million people were killed. He was hanged on the 16th of April 1947 at the entrance of the crematorium of this camp.

Since 1979, Auschwitz is on UNESCO’s list of World Heritage Sites under the name of “Auschwitz – Birkenau – German Nazi concentration camp of death.” On the 21st of January 1945, Auschwitz was liberated by the Soviets. This day was chosen to be the International Holocaust Remembrance Day. It’s important to remember the past and learn from it, so this inferno will never happen again.

This square is one of the places you should visit in Krakow. The monument represents a metaphor for the suffering of the Jews in WWII. Empty chairs on the square epitomize the square that was once full of people, children just living their lives.

The memorial for the heroes of the Ghetto includes 33 large empty chairs and 37 smaller chairs located on the edge of the square and at the tram stops, on the place where once were the walls of the Podgorze ghetto.

The monument is designed by Krakow architects Piotr Lewicki and Kazimierz Latak and opened on 8 December 2005. On the square, there is also a small building where visitors may light candles in honor of the murdered Jews.

Enjoy the atmosphere of old cafes and restaurants

After these terrible historical lesions that will surely upset you, visit some of the city famous cafes and restaurants. Singer café is one of them. It was a sewing machine shop, and now it is an excellent café with an incredible cappuccino.

When it comes to food, you need to try some of the Polish specialties like Polish dumplings, pork in green pepper sauce or potato pancakes. The best restaurants are Wentzl- the finest restaurant in Krakow opened in 1792, Nostalgia – traditional Polish restaurant with fantastic potato pancakes and Dawno Temu in the Jewish quarter where you can enjoy some dishes like czulent.

These cafes and restaurants have become the biggest Krakow tourist attractions, and visiting them is undoubtedly one of the things you need to do while you are in Krakow. 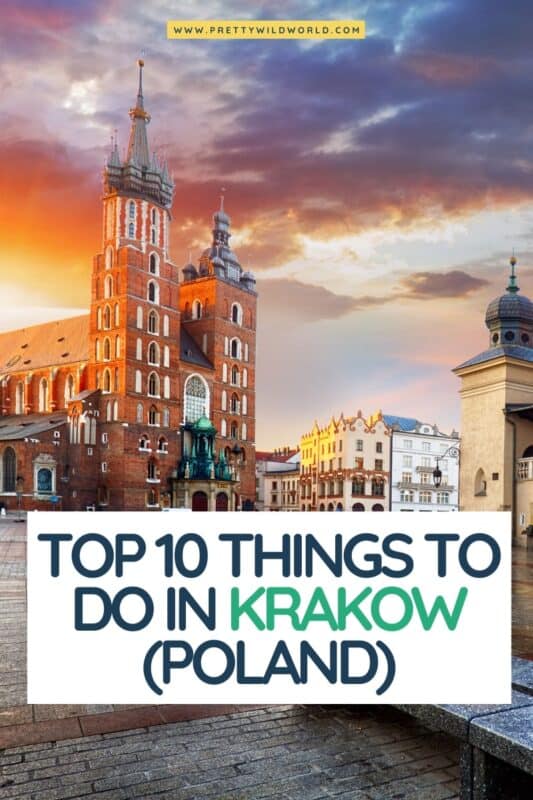