Top 11 Things to do in Warsaw (Poland)

Warsaw is the capital city of Poland. It has more than 1 700 000 residents. It’s economical, tourist, and cultural center of Poland. There are countless things to do in Warsaw, like visiting the Royal Castle, King Zygmunt’s Column, beautiful vibrant Market square, and Barbican.

The best time for your visit is during winter when the city gets its unique charm. But if you decide to visit Warsaw in winter, be sure to book your hotel in advance, because all the hotels in Warsaw are fully booked during the peak of the season.

There are plentiful legends about the foundation of this city, but my favorite is the love legend. The fisherman Wars fell in love with the mermaid Zawa. Their love was so big that the city was born from it. The name of the capital was a combination of their names Warszawa, and it means, “Belonging to Wars.”

Like nearly all European cities in World War II, Warsaw was bombed and destroyed, too. 85 percent of the town was demolished. After the war, the government reconstructed all the buildings, houses, palaces. The Warsaw’s historical centers, The Old and New Town were restored, too.

During the medieval period, the capital of Poland was the city of Krakow. Warsaw became the capital in 1596. Today, Warsaw is the political, economic and cultural center of Poland. Warsaw is another underrated travel destination in Europe, and I hope that after this article you will learn a little bit about it and decide to visit Warsaw.

Warsaw, the capital of Poland, is a vibrant and dynamic city that embraces the future but does not try to hide from its past. From German and then later USSR occupation to breaking free, the city has a unique and unusual past. It also has something to offer everyone from cultural wonders to great nights out. If you are a fan of history, culture or simply enjoying new places, this city should feature on your travels.

Before you start packing your bags to visit this fantastic city, you will need to arrange your visa. Happily from 2021, you can save time by applying for this electronically. The Etias for Poland allows you to complete forms and submit documents online, and within a few days, you receive your visa by email.

With being able to apply for a visa this easily, the delights of Warsaw have never been this easy to savor.

So, once you’re in Poland, what to do?

Experiences and top things to do in Warsaw

Start your Warsaw sightseeing with “The Royal Route.” It is one of the most preferred tourist tours in Warsaw. It takes place on the left bank of the Vistula river, starting from the Warsaw’s Castle Square and ending at Wilanow Palace. The route goes southward from the city’s Old Town. During the walk, you will see a series of Warsaw historical landmarks. 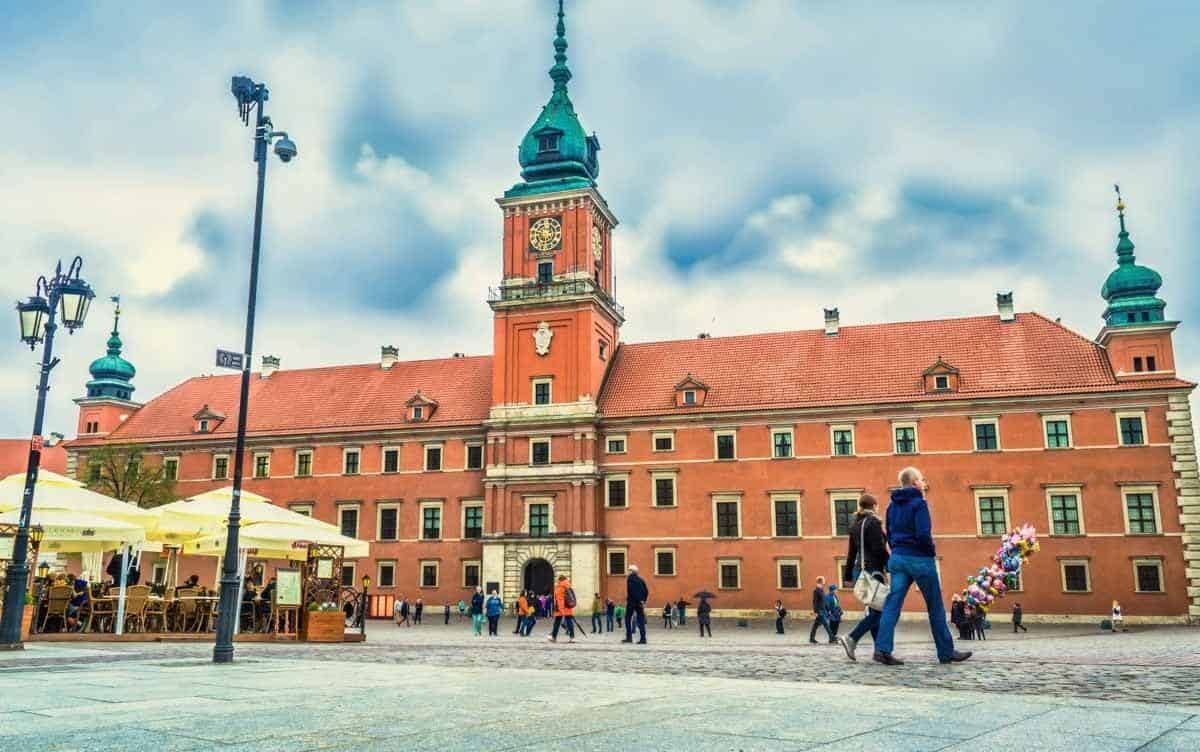 One of the most popular Warsaw attractions is the Royal Castle. This baroque palace was the residence of the Polish monarchs. Royal Castle is located in the Castle Square, at the entrance to the Warsaw Old Town. During WWI, the castle was the seat of the German government in Poland. From 1926 until 1939, this was the residence of the Polish president.

In 1939, Nazis burned and looted the castle, and in 1944, the castle was almost destroyed. The reconstruction of the palace started in 1971 and was completed in 1988. The Royal Castle of Warsaw became part of UNESCO’s World Heritage Sites list in 1988. Nowadays, the mansion is being used as a museum and represents the center of Polish history and culture.

One of the most visited Warsaw points of interest is its museums. During your visit, you can visit the Warsaw Uprising Museum, POLIN Museum of the History of Polish Jews, Polish Army Museum, National Museum in Warsaw, Fryderyk Chopin Museum, Gestapo Headquarters Museum, Czar PRL – Life under Communism Museum, Marie Curie Museum, Warsaw History Museum, etc.

The majority of museums are dedicated to polish history during WWII, to the suffering of the Jews during the war, but also to recognized Polish artists and scientists like Marie Curie and Fryderyk Chopin.

“Pekin” was inspired by American art deco high-rise buildings and designed by Soviet architect, Lev Rudnev. The building was designed in the “Seven Sisters” style but was always called “the Eight sisters” by locals.

Nowadays, this building is home to numerous companies, public institutions, libraries, universities, etc. The Polish Academy of Science is also located here, in this building. “Pekin” has numerous funny nicknames like “Stalin’s syringe,” “Elephant in Lacy Underwear,” or even the “Russian Wedding Cake.” This building is one of the landmarks and symbols of this city, and of course, one of the things to see in Warsaw.

Take a bike tour around the Jewish Quarter

One of the things to do in Warsaw that should be on the top of your list is taking a bike tour around Warsaw Jewish Quarter. The tour includes a rented bike, a 15 km long ride and lasts for 2 to 3 hours. Jews lived in Warsaw since the medieval period. They were an essential part of the community and contributed a lot to Poland’s culture and history.

Did you know that Warsaw was the most prominent Jewish city in Europe? Well, on this tour, you will learn all about the history of the Warsaw Jews. This tour includes a visit to the former area of Warsaw Ghetto, Museum of the History of Polish Jews, Ghetto Heroes Monument, Umschlagplatz, Mila 18 memorial site, remains of Pawiak Prison, Nożyk Synagogue.

Tour also includes smaller groups of tourists and will allow you to see some places that are being missed on walking tours.

What to do in Warsaw after all these walking and biking tours? I suggest you take a traditional Polish cooking class. The class is taking place in Polish Your Cooking Studio. By attending this short course, you will learn how to prepare some of the famous Polish dishes like pierogi but also have fun and meet amazing people.

Your teacher will be a professional chef, and he or she will introduce you to polish cuisine and tell you more about polish history through its dishes and cooking. After taking this class, you will not get only great memories, but also a small gift and a certificate.

Enjoy the view from the St Anne’s Church Tower

St. Anne’s Church is located in the historic center of Warsaw. It is considered to be one of the oldest buildings, built in the 15th century. In 1454, the Duchess of Masovia, Anna Fiodorowna founded this church, and at this moment its history is starting. The church was reconstructed several times but was not damaged a lot during WWII, like the rest of the city.

Today’s appearance, the church got in 1788. The designer of this reconstructed version was Chrystian Piotr Aigner. The church was rebuilt in neoclassical style. On the façade of the church, you can see the statues of the Four Evangelists.

Why is this church one of the places you need to visit in Warsaw? There is one simple but great reason. We all love a breathtaking view, right? Well, if you want to enjoy the view over the historic center of Warsaw, you should climb at the top of the bell tower.

Every city in the world has that one point which shows the city displayed in all its beauty in front of you. This place will show you the best in Warsaw!

Wilanow Palace is located in the Wilanów district, and it’s one of the places you should put on the list of things to do in Warsaw. This baroque palace is one of Poland’s most important monuments. Augustyn Wincenty Locci designed this palace for King John III Sobieski in the last quarter of the 17th century.

The design and architecture of the palace were supposed to magnify the Polish king, Sobieski family and military victories of King. From 1730 until 1733 this palace was the residence of Augustus II the Strong and also the home of the King of Poland. After the death of King John III Sobieski, the castle had become the home of his sons and after that, home for numerous famous and wealthy Polish families like Sieniawski, Czartoryski, Lubomirski, Potocki, and Branicki.

Wilanów Palace survived critical historical periods and events like Poland’s partitions and both World Wars. The Palace’s museum, established in 1805, treasures the royal, historical, and artistic heritage of Poland. During the summer, the palace hosts numerous cultural and music festivals and events such as Summer Royal Concerts in the Rose Garden.

Since 2006, the palace has become a member of the international association of European Royal Residences. This palace is the perfect place for you to end your tour of the Polish capital. After long sightseeing tours around Warsaw, Wilanow Palace would be the ideal place for a peaceful afternoon walk. The palace has beautiful gardens with flowers, trees, ponds and breathtaking sculptures by famous artists and sculptors.

The appearance of the palace and its lovely gardens reminds a lot of Viennese Palace of Schönbrunn. Naturally, it is a way smaller and modest mansion that Schönbrunn, but it brings out the same energy. This palace inspires you and makes you imagine how Sobieski family lived here centuries ago.

When you finish your tour of the castle, I suggest you forget about all your worries, lie down on the lawn in the garden of the palace, and think of all beautiful places you have seen in this gorgeous but a little bit underrated European capital.

Read also: 25 Beautiful Castles in Europe That Would Inspire Your Wanderlust

For most Royal Łazienki Park is a hidden gem. It is the city’s biggest park, and its Baroque design was fashioned in the 17th century. It is also home to some truly wonderful buildings such as the Palace on the Water. It also boasts an amphitheater from the neoclassical period. Today, yoga and meditation classes are held in the summer months.

One of the most moving experiences you will have in Warsaw is when you discover the 1944 Warsaw Uprising. Using a multimedia design to give an idea of what conditions were like, the museum brings to life the motto of the rebellion, ‘We wanted to be free – and to owe this freedom to ourselves’. Bunkers used and newspaper extracts written at the time are featured, together with a chronology of the battle.

Today the Vistula River has become a trendy meeting spot. When the young and trendy aren’t meeting to socialize, the riverbank has hosted concerts for Poland’s up and coming musical talent. When the beach is not in use by a band, the riverbank now features an outdoor theatre and cinema. As you can imagine, there are plenty of cafes offering refreshments.

→ Check out these activities in Warsaw