Exploring off the beaten path Europe sometimes means just getting lost somewhere completely unforeseen. Some call it an inconvenience, some call it discovery.

If you love exploring some of the hidden gems in Europe, there are some unique places in Europe awaiting you to discover and some destinations to capture your soul. If you are like one of those who would head to a random village on a map on a whim, this list is just for you.

Thanks to the extensive rail and road networks in Europe, it is effortless to get around smaller destinations. You can search and book buses, trains, and flights online and even plan your trip to explore undiscovered Europe. Sometimes, buses can be a great way to explore the hidden gems in Europe.

So, have a look at the list of some of the unique places in Europe, and we hope you would like to add some of them to your Europe bucket list and pack your bags to visit these wonders yourself.

It is indeed the living example of how nature can be unexpected and magical at its best. Kjeragbolten is well regarded as a mountain rock located in Rogaland County of Norway. The boulder is positioned between two cliffs around 984m above the sea level so you can feel like you are flying.

Despite being the well-known tourist destination, Kjeragbolten is among the best spots for base jumping. If you got some adrenaline rush, be sure to add this place to your Europe bucket list.

However, it is not easier to get there, especially climbing the mountain. You will need special climbing equipment to ascend some parts of the range.

Once you reach there, all your hard work will be paid off as the view from the rock is fascinating. If you have a phobia of height, don’t look down.

Read also: Castles in Norway and Things to do in Oslo 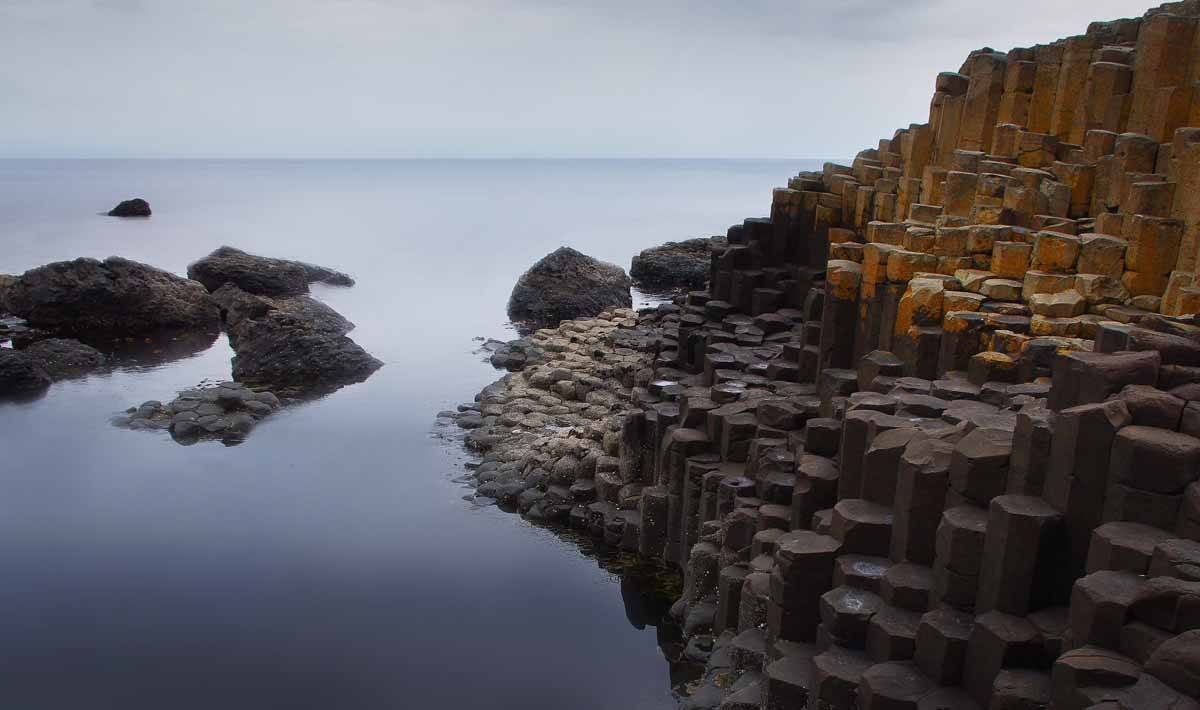 It is a natural reserve in the vicinity of Bushmills, Northern Ireland. This off-the-beaten-path Europe is unlike any other destination in the world.

It has around 40,000 basalt columns which were listed in UNESCO World Heritage Sites because of their peculiar shape. Even though these rocks are formed due to a volcanic eruption, there is still an interesting story about them.

Legends had it that a giant built the stones. Causeway Tourist Center was opened in 1986 where you can get all the essential details of this site, buy souvenirs and exchange currency.

If you had to live in a place which still lacks roadways, how would you react? It seems weird, right? You are wrong. Giethoorn is a fairytale-like village located in the Overijssel province of Holland.

This village was built entirely on small islands that are connected by around 180 wooden bridges and canals. It is also recognized as the Dutch Venice.

Giethoorn has been the center of attraction for decades for tourists who are always here to explore undiscovered Europe. People who live here are indeed fortunate. Even just a day is not as usual as it has regular boat rides and every island has a walking trail with the canals.

Also, visit Giethoorn‘t Olde Maat Uus Museum where you can figure out how life here used to be around centuries ago. In short, it is one of the must-see places in Europe before you die.

During the 14th and 15th centuries, this trend was customary as it added beliefs in monks that they will be closer to god in that way. You can reach the monastery either by road on the nearest cliff or by climbing stairs and taking the cable car over the gorge around the two cliffs.

That said, the Holy Trinity Monastery should definitely make it to your Europe bucket list!

Officially known as the Autonomous Region of the Azores, the Azores is undoubtedly one of the autonomous regions of Portugal, other being Madeira. This archipelago consists of nine volcanic islands in the North Atlantic Ocean, which is located around 1643 km west of Lisbon and 1507 km northwest of Morocco.

All of the islands here are originated from the volcano, including santa Maria, without any activity recorded since islands were settled. On the island of Pico, Mount Pico is the highest peak in Portugal.

When you get here, you will observe what Mother Nature has created. It is a land full of natural beauty in the blue enormity of the Atlantic Ocean. It is one of the unique places to visit in Europe. On the Santa Maria Island towards the east, it has inviting beaches of warm white sand, and vineyards along the slopes indeed resemble giant staircases.

The Azores is the collaboration of nine islands – nine small worlds that have as many similar things as variances, where inhabitants share their friendliness to all.

Plitvice National Park is well regarded as one of the most serene national attractions in Europe. Because of its natural significance and beauty, Plitvice is the large forest complex and a system of 16 interconnected lakes, and it was declared as a national park in the year 1949. The park became the UNESCO World Heritage Site in 1979.

Plitvice Lakes is one of the great natural wonders in the world. It is a pristine and lush valley having 90 waterfalls, 16 terraced lakes, and miles of boardwalk. It is also known as one of the hidden treasures in Europe.

Sadly, it is no longer a mysterious place as it flocks over 15000 tourists and 1.2 million visitors every year descending on it in peak season. Plitvice is rapidly becoming the victim of its fame. You have to prepare in advance if you want to soak up the serenity and natural beauty.

Here, the mineral composition forms a range of serene colors in the lakes, from teal to green, azure, blue and grey. It has the picturesque view of some fat fish in the crystal clear waters. The water is also a high hill runoff in itself.

If this magnificent destination does not make it to your Europe bucket list, you’re missing by a ton!

Also known as Troll Tongue, Trolltunga is a rock formation located around 1100m above the sea level in Odda municipality in Hordaland County of Norway. This distinct cliff juts horizontally off the peak, in the free air around 700m above the north of Ringedalsvatnet Lake.

In recent years, Trolltunga has always become popular for hiking and rock climbing. Due to its increasing popularity, Trolltunga has become a significant tourist attraction and a national icon. Every year, over 800 people hiked until 2010. Over 80000 people walked in 2016 alone and took a 27 km round trip from Skjeggedal. It is one of the most anticipated hikes in Norway.

Here, the route goes through the high terrain with streams, creeks, mud puddles, boulders, water and wet March at various spots along the hike. The territory is covered well with snow and ice from late September to June. At Trolltunga, it can be snow after hard winter, even in the summer season.

The Faeroe or Faroe Islands are the group of 18 islands in the heart of North Atlantic Ocean, towards the northwest of Scotland, and between Norway and Iceland. These are self-governing island territories of Denmark, even though they seek for higher independence politically.

These islands have around 50000 residents, and they have their own culture and languages. When visiting these islands, you will always remain around 5km from the ocean, and there are around 2 million pairs and 70000 sheep, with the largest community of storm petrels across the world.

The rugged, green, and windy Faroe Islands are the best countryside areas in Europe. These are a small country, and you can quickly get around the islands as they are well connected through public transport.

When it comes to the best time to visit the Faroe Islands, the tourism season is too short, as it lasts only from May to September. A lot of visitors get here between July and August. Be sure to arrive here in late May or early June for the best experience.

The Red Sands or Rauðisandur Beach is, as the name suggests, a serene red beach located in a remote landscape in the Westfjords in Iceland. A lot of beaches are black in Iceland, but the beaches are pink or golden in the Westfjords. Rauðisandur is reddish, and the beach’s name is derived mostly from sand color. In turn, the sand is colored from its pulverized scallop shells.

You might also see that the beach is either known as Rauðisandur or Rauðasandur, but you may call it with either of these names. The sand often changes in hues from yellow to black or red. If you want to get once in a lifetime experiences in Europe, visit Rauðisandur Beach as it stretches for up to 10 km from Latrabjarg bird-cliff in the west.

In some parts of Westfjords, the roads are still not paved. The path leading to Rauðisandur is a winding, gravel and steep road, so you should drive slowly. It is also known as the scariest road in Westfjords.

Submerging yourself in the pink water lake and getting covered by the pink flamingos is an unmatched scene and one of the most unusual things to do in Europe. It is a rosy-tinted lake in Valencia, Spain. Las Salinas de Torrevieja is one of the most exotic natural parks in Valencia and is located around yet another water reserve, Laguna de la Mata.

Spreads over 1400 hectares and is split from the Laguna de la Mata by a formation of stratified rock of anticline known as Chaparral, Las Salinas de Torrevieja is well connected to the ocean through Acequion canal. It was built to obtain salt from the sea in the 13th century. It has enormous salt mountains piled high around the shore, showing the legacy of its history.

Visiting the iconic Santa Claus Village in Lapland, Finland is one of the rare European breaks as you can meet the very own Santa Claus and cross the serene Arctic Circle every day here.

Santa Claus spends his time in this village to ensure the overall well-being of children and take care of the kindness of adults, and also spread his message of goodwill and love and expand his Christmas vibe across the world. It is an amusement park in the Lapland region of Finland and was opened in the year 1985.

It takes around 30 minutes to get there. Korvatunturi was the first original home to Santa Claus, which was mysterious. Rovaniemi was announced officially as Santa Claus’s hometown in 1985.

In each aspect, Lake Blend is as beautiful as it seems in the picture and should be included in your Europe bucket list. With its picturesque church on islet and bluish-green lake, some of the highest Julian Alps peaks, a historical castle atop a rocky mountain, and Karavanke as background, Bled is the most well-known resort in Slovenia, attracting everyone from holidaymakers and honeymooners drawn by the romantic setting, who are here for biking, hiking, canyoning and watersports activities.

Well, it is clear that Bled can be loaded with tourists from July to August and it can be overpriced. In this case, people come in droves with several significant destinations in the world, but it will keep on doing so. This place is extraordinary for off the beaten track European holiday.

Read also:Castles to visit in Slovenia