Do you want to know what are the top places to visit in South Korea?

South Korea is a prominent East Asian country, which occupies the South of the Korean Peninsula. It is also the official Republic of Korea. The country has the borders of North Korea in its northern part, China in the western part across the sea, and Japan in the southeastern part crossing the sea.

It is also famous for its numerous cultural events and festivals hosted throughout the year to be cherished by both the locals as well as the tourists. Now the question is when to visit South Korea? The month of April to June, which is the spring season in Korea, is the ideal time to visit and engage in various adventurous activities.

So, let us have a look at the famous tourist places or the best places to travel in South Korea for your trip.

❗️ Be insured before your trip and get a SafetyWing FREE insurance quote
📚 Read our post about why you should always have insurance
✈️ Find out how to find cheap flights using Skyscanner or find deals now
🛌🏻 Book your accommodation through Booking.com, Expedia, or Agoda
🎭 Find awesome and hassle-free tours through GetYourGuide or Tourradar
🚘 Explore the surrounding areas on an epic road trip
📱 Read destination reviews and other traveler tips on TripAdvisor

What are the best places to visit in South Korea?

It is the capital city of South Korea, a 24×7 crowded city life, and tops the list in terms of decorum. Starting from the high-end skyscrapers to plenty of appealing natural parks, architectural wonders in terms of temples, palaces, pagodas to the headquarters of some of the biggest corporations of the world, Seoul aces in everything.

It is the biggest economic hub of South Korea and ranks in the fourth position in terms of top economic centers in Asia and 11th position across the world.

Where to stay: Best hotels in Seoul

Read the full blog post: Top 18 Things to do in Seoul, South Korea

Seoul is one of the best places to visit in South Korea!

Widely known for its green tea leaves, Boseong is a famous tourist attraction of South Korea in the province of South Jeolla. The prime attraction of this destination is its vibrant bright green tea estates that serve as a visual treat for all visitors. Whether you are addicted to Green tea or not, you will love exploring the beautiful scenic tea gardens here.

From sipping a glass of warm tea to rejuvenating in a luxurious tea bath, Boseong is one of the best places to visit in South Korea.

Where to stay: Best hotels in Boseong

It is the capital city of North Jeolla in South Korea. Jeonju, being the food capital of the country and lets you taste the best of South Korean food like Bibimbap, Choco Pie, Hottoek, Makgeolli rice wine, and plenty of other lip-smacking cuisines and drinks.

The city has a comparatively slow life, unlike the other south Korean destinations. You can get the best of historical architecture here from ancient times with cobblestone streets having hanoks, which are the traditional Korean homes.

Where to stay: Best hotels in Jeonju

It is the capital city of North Gyeongsang in South Korea and a famous destination in the South Korea holidays. Andong is known for its discovery of wooden masks due to which the destination grandly hosts the Mask Dance Festival from the last week of September to the first week of October, serving as a visual treat for all visitors.

It is an ideal destination for historical south Korean sightseeing.

Where to stay: Best hotels in Andong

It is the capital city of Gangwon in South Korea. It is a popular weekend gateway from Seoul and also a great place to have a South Korea honeymoon due to its romantic charm. Surrounded by breathtaking mountain ranges, gardens, colorful foliage, and shimmery lakes, Chuncheon is among the best places to visit in South Korea with your better half.

Where to stay: Best hotels in Chuncheon

Also known as Seongsan Ilchulbong, the destination is a tuff cone crate that has formed by a major sea volcanic eruption 5,000 years ago.

Today, it ranks between the UNESCO world heritage site and also an important destination of Jeju Island in South Korea. It is a bowl-shaped structure surrounded by thick sharp jagged rocks having a green landscape at the base level.

The scenic beauty of the destination is dramatic as if a precious rock crown has awarded it. As the name suggests, Ilchulbong here refers to the highest point that offers breathtaking sunset views to the tourists, while Seongsan is a picturesque hill looking like a castle.

Adventures lovers can enjoy a wonderful hike through its steep slopes and enjoy the captivating sea views at its highest point. It features in the list of topmost tourist best places to visit South Korea.

It is the biggest metropolitan city of South Korea after Seoul and also its economic, educational, and cultural hub. It has some of the most beautiful South Korean beaches, mouth-watering seafood, picturesque mountainous backdrop, tons of bars, restaurants, cafes, breweries, gorgeous urban landscapes, and various steaming hot springs.

The bustling city is also famous as the ‘San Francisco of South Korea’ and as a vintage shopping paradise. Beaches like Haeundae, Gwangalli, Songjeong, Dadaepo, and Songdo are pure love in Busan and also feature in the list of best beaches in South Korea.

Where to stay: Best hotels in Busan

Busan is indeed one of the must places to visit in South Korea.

It is a stunning national park in South Korea, and also a UNESCO recognized world heritage site. The prime attraction of this biosphere reserve is Seoraksan Mountain. It is a breathtaking beauty in South Korea that keeps on changing colors season-wise throughout the year.

It also offers interesting outdoor attractions like- Seoraksan Cable Car ride, Geumganggul Cave, Hike to Biseondae rocks, and hike to Ulsanbawi rock. It is a must inclusion in your South Korea vacation and undoubtedly has the best of this beautiful country wrapped in its folds.

It is a famous island of South Korea in the southern part of South Jeolla in Korea Strait. The destination is popular among tourists due to its Hallasan Volcano standing at an altitude of 1950 meters from sea level. It is also a biosphere reserve having heavenly scenic beauty lined with colorful flowers amidst stunning green valleys, gorgeous hilly background with crater lakes, 368 parasitic volcanoes in the surroundings, and plenty of unique plant species.

Another prime attraction here is the Manjanggul Cave, which is an 8km long tunnel formed by cooling lava. Other attractions include Loveland, Cheonjeyeon Waterfall, Seonimgyo Bridge, Jeju Folk Village Museum, Seongsan Ilchulbong, Jeongbang Falls, Jungmun Beach, and Jusangjeolli Cliff. It has some of the most attractive places to see in South Korea.

It is a traditional scenic village in Seoul situated at the summit of the hill along with Gyeongbokgung Palace, Changdeokgung Palace, and the royal shrine of Jongmyo. The town carries a major historical significance from the past and houses plenty of traditional Koreanhanoksfrom the period of the Joseon Dynasty.

It is advisable to take aSouth Korea guide with you to know about the historical facts behind the location and understand the best of Korean traditions. The village today has its age-old hanok operated in terms of guesthouses, cultural centers, restaurants, teahouse to let the visitors soak themselves in Korean culture.

The entire destination is painted in pink hues everywhere due to the cherry blossom trees serving as a visual treat. You can enjoy the captivating cherry blossom views at the Yeojwacheon stream and Gyeonghwa train station. 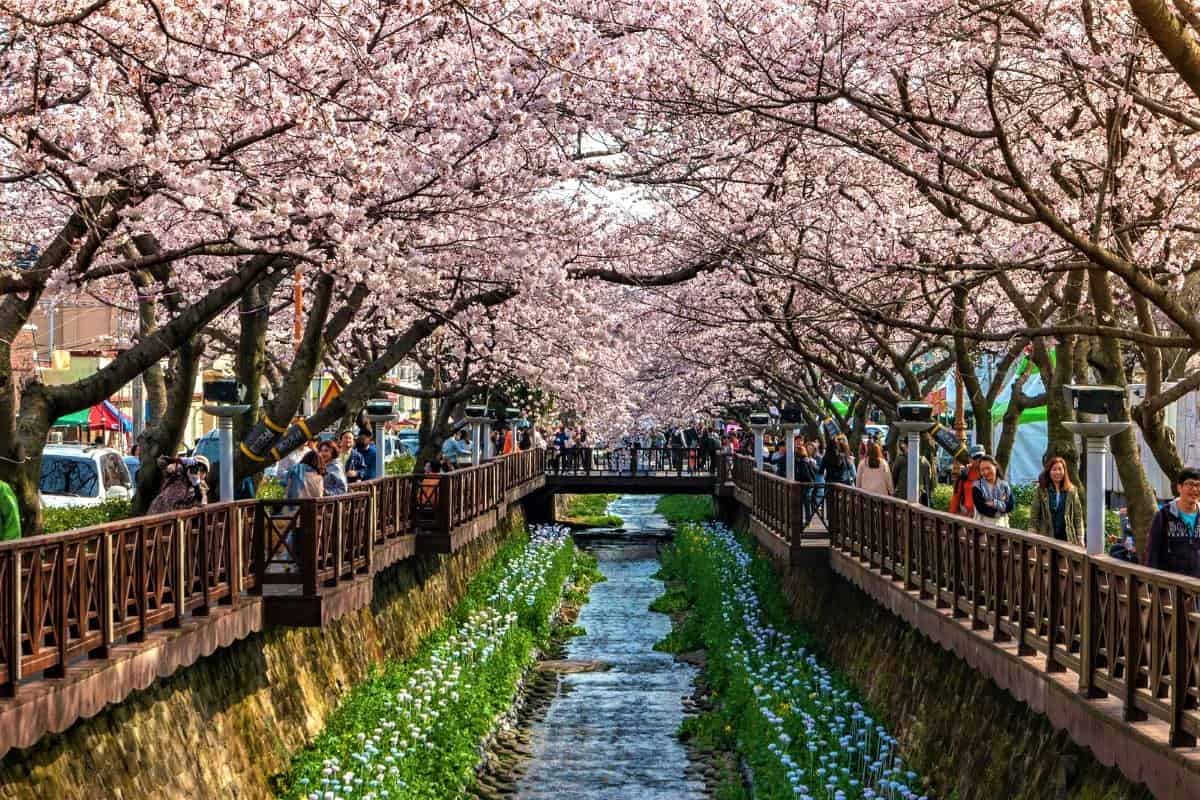 It is a coastal city of South Korea and one of the best places to stay in South Korea, the southeastern tip of North Gyeongsang. It is a paradise for history lovers and nature admirers with its awe-inspiring scenic beauty of the gorgeous mountain ranges surrounding all over accompanied by the lush green vegetation and narrow winding streets having captivating historical structures peeking in different corners.

The city has some of the best collections of tombs, rock carvings, temples, pagodas, Palace ruins, and glorifying Buddhist architecture making the city a museum without walls. Some of the best places to visit here are- Gyeongju National Museum, Bulguksa Temple, Seokguram Grotto, Daereungwon Tumuli Park, Wolji Pond, and the list goes on.

It has an exclusive collection of ancient tourist spots and is one of the best places to travel in South Korea.

Where to stay: Best hotels in Gyeongju

It is the largest metropolitan city of Gyeonggi-do province in South Korea at a distance of 30km from Seoul. It is another heritage destination of South Korea, which was supposed to become South Korea’s capital city in the period of the 18th century, but when King Jeongjo of the Joseon dynasty died, Seoul became the capital city of South Korea.

Where to stay: Best hotels in Suwon

It is a county in South Korea in the Gangwon-do province. It is a winter destination in South Korea famous for its ski resorts, cross-country skiing, ski jumping, bobsleighing, and plenty of fun winter activities. The two renowned ski resorts of the destination are- Alpensia and Yongpyong.

It is also famous for hosting the 2018 winter Olympics and even houses the Olympic village, which is one of the best places in South Korea. Be it rolling in the Buckwheat flower beds, visiting the snow paradise Daegwallyeong Sheep Farm,’ exploring Lee Hyo-seek culture village, pay a visit to Jeonggangwon Food culture center or the beautiful Woljeongsa Temple. It is definitely among the best places in South Korea.

Where to stay: Best hotels in Pyeongchang

It is another metropolitan city located in the northwest of South Korea, having borders of Seoul and Gyeonggi. Being the third-largest city in South Korea, it is an important industrial hub and economic center.

The prime attraction of this city is the Chinatown and Open Port areas. Here you can enjoy relaxing and strolling at the sea harbors, enjoy mesmerizing sea views, enjoy ferry rides, rejuvenate at the city waterfronts and taste plenty of lip-smacking Chinese cuisine.

If you are thinking of what to see in South Korea in Incheon, here are some of the best attractions – Incheon Grand park, Spasis sauna center, Eurwangni Beach, Jeondeungsa Temple, WolmidoIsland, Sorae Pogu traditional fish market, Incheon Museum, Jayu Park, and many more.

Where to stay: Best hotels in Incheon

Check out these activities in South Korea

4.2K shares
15 BEST Places to Visit in Slovakia
← Previous
Top 10 Things to do in Tbilisi (Georgia)
Next →