Finland is known for many things including having one of the most difficult languages to learn. However, as daunting as it may sound, saying Hello in Finnish is perhaps the easiest to learn for most foreigners as most Finns either nod or say: Hei and Moi.

That’s it. Simple and easy but of course there’s more to Finnish greetings than just saying Hei or Moi as there are different phrases you can use in different scenarios and that’s what we’re about to learn here!

How to say Hello in Finnish? Different Greetings Finns Use!

After living in Finland for over a decade and working in different restaurants in Helsinki and Vaasa, I’ve learned different Finnish greetings both formal and informal ways.

Finnish language without a doubt, not the easiest language to learn and to this day I am struggling to hold a conversation with a Finn. However, I’ve been in few Finnish courses which helped me survive everyday life in Finland using basic spoken language.

Plus, spoken Finnish is not as daunting as written Finnish in my opinion and it is friendlier than it sounds! So, here are few ways to say greetings in Finland including how to say hello in Finnish in different scenarios.

📚 Do you want to learn Finnish and tap into its culture? Varpu offers an awesome course to kick start your Finnish language journey! She’s a fellow Finland blogger with great content. Check her course out! 💖

Everyday use of Hello in Finnish: Hei [hey]

Hei is one of the informal ways to say Hello in Finnish that is quite similar to when we say Hey in English. You also pronounce it the same way!

You use Hei just like you’ll use Hey or Hi in everyday life so you’ll hear this often when you enter a shop, a restaurant, meet a friend, or even strangers.

Hei is an everyday Finnish greeting meaning this is used mostly in everyday scenarios where formality is not needed. That said, Finns are not entirely all about formality so you can use Hei in most social scenarios.

Also, Finns are shy by nature so don’t expect any special greetings if you see them. A simple Hei is typical but normally, most Finns will just nod if they pass you by the stairs if you live in an apartment building and usually that is more than enough greeting from them. 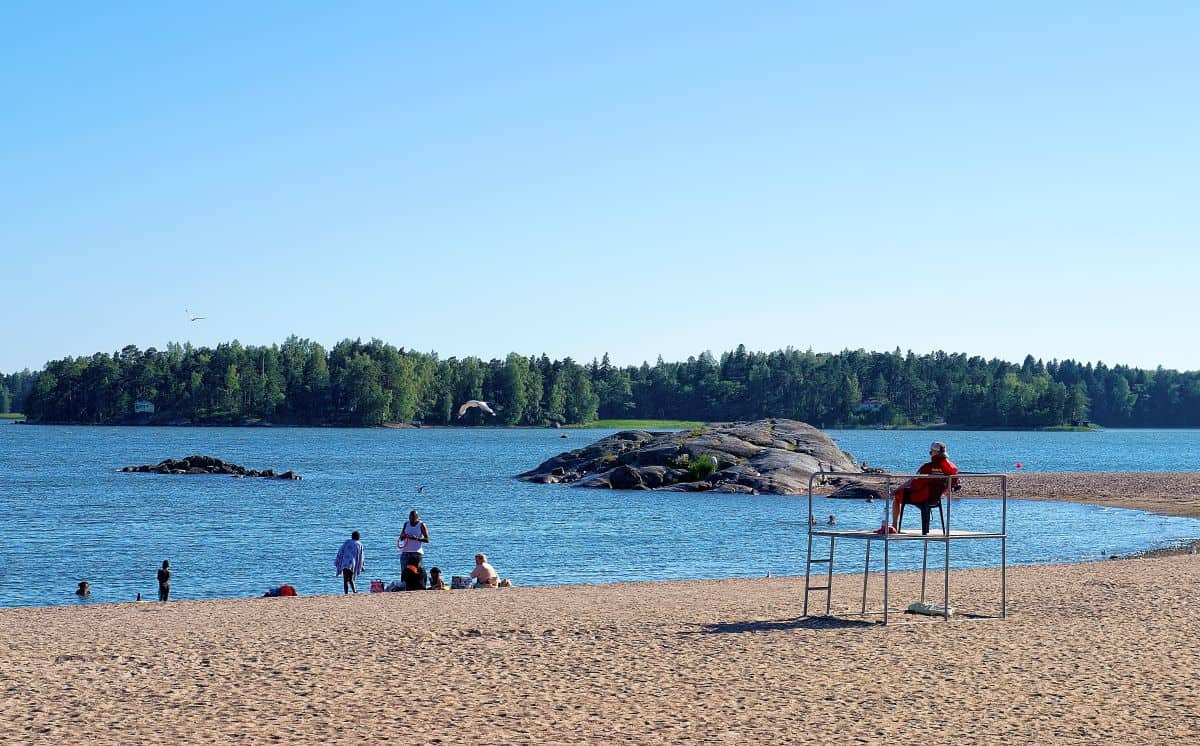 A typical apartment stairwell Finnish greetings include a sharp nod and a stern “moi”.

Just like any other language in the world, Finnish also have slangs that differs from one region to another. But, don’t worry, it is more fun than scary!

You’ll hear this often in spoken language as much as you’ll hear Hei and perhaps one of the most typical ways to say Hello in Finnish.

I use this more than Hei as I live in Vaasa and saying “Hei” or “Hej” will make people assume I speak Swedish (which I don’t) and if I say Moi, people will understand that I’m a Finnish speaker.

Moikka is another common way to say hello in Finnish which can also be used to say “goodbye”. Moi is the shorter version of this Finnish greeting and it is also used more often than saying the full “moikka”.

However, you’ll hear people use this a lot depending on where you are and I think it is a really cute way to say hello! I usually say “Moi” to say hello and “Moikka” to say goodbye.

Terve means healthy but it is also one of the common Finnish greetings that means Hello. Albeit common, you won’t hear this as much as Moi and Hei but you definitely can use this in the same way as saying Hello!

Younger generations don’t use Terve that much anymore but it is a nice way to say hello in Finnish and Finns will appreciate it.

I’m not entirely sure from where Morjesta originated but you’ll hear this here and there when people say hello to people they know well or store clerks who want to sound friendly and approachable.

Upon research, it seems so that Morjesta came from Morjens which is slang for Morgon (morning in Swedish).

Generally, you don’t hear people say Morjesta that much but in Vaasa, it is quite a common way to say Hello as the majority of its population are Finn-Swedes.

Moro is another slang to say hello in Finnish which has gained popularity in recent years. You’ll hear young people greet each other with “Moro” which could be, in essence, translates indirectly to “What’s up?” in English terms.

I don’t use Moro as a Finnish greeting as it typically misleads people into thinking I speak fluent Finnish. But, it is a cute way to say hello for sure!

Other ways to say Hello in Finnish: Päivää, Huomenta, and Ilta

Hei is one of the common ways of saying hello in Finnish!

In Finnish, you can also use the time of the day to say Hello which is usually quite common for elderly people to say but it is a formal way to say your greetings. I use these Finnish greetings in a bit more formal scenarios like addressing people older than me, when I’m in the bank, or any important matters.

Päivä means day in Finnish and you can use this as Hello any time of the day but make sure to pronounce the ää a bit longer at the end. I like to use this when I was doing customer service as it sounds more formal and you can use it all the time!

You can also say “Hyvää Päivää!” to say “Good day!” but it is not common for people to greet this way.

Huomenta also means “Morning” in Finnish and the equivalent of saying “Good Morning” if you want to greet someone Hello at the early hours of the day. You’ll hear this a lot when you visit a cafe in the morning or head over to a bakery to get some Finnish bread for breakfast.

When I was working in a cafe, I’ll hear a lot of our customers greet me

I also hear this a lot between colleagues to greet each other in the mornings.

You can also say “Hyvää Huomenta!” if you want to sound extra cheery and it means “Good Morning!”

Also means “Evening” in Finnish and people typically use this to say Hello in the, well, evenings. Normally, Finns would say “Hyvää Ilta!” which translates to “Good Evening!”.

It is a bit informal to just say Ilta but it is perfectly fine and people do say it just like that.

How to say hello in Finnish when answering your phone

9. If you know who is calling

10. If you do not know who is calling

That’s it! Here are a few ways how to say hello in Finnish and a few alternative Finnish greetings you can use to kick start your journey here in Finland. Hope you liked it!

💕 If you’re interested in learning Finnish, start your journey with Varpu’s course and kick start your Finnish language adventure!

Which ones of these Finnish greetings you’ll try when you visit Finland? Let me know on Instagram!