Top 12 Things to do in Bologna (Italy)

Do you know that Italy has its own culinary capital? Well, you'll be surprised! In this post, we have written down some of the best things to do in Bologna – Italy's foodie destination. And yes, this post includes tips on what to eat and where to go and as well give you insights about the attractions in Bologna!

A great getaway that offers a beautiful change from the more crowded tourist places, Bologna in Italy has a charm of its own. Lovely red rooftops, a cosmopolitan crowd, historic areas, churches, and the varied things to do in Bologna make it an exciting travel destination.

You can visit beautiful churches such as the Basilica of Santo Stefano, Sanctuary of Santa Maria della Vita, and the Basilica of San Petronio, one of the largest churches in the world. Watch the world go by at Piazza Maggiore and see some of Bologna tourist attractions on the square. Stop by to admire the eye-catching Fountain of Neptune.

You can also climb all the way up the Asinelli tower for spectacular views of the city. Visit Archiginnasio di Bologna, a former university building where the Anatomical Theater is one of the main highlights. And, see beautiful exhibits at the Bologna Archaeological Museum.

Bologna is also an absolute delight for food lovers. It is famous for Parmigiano-Reggiano cheese, tortellini, and other scrumptious food. You can enjoy a wide range of delicacies at various restaurants and eating places in Bologna.

Visit the food market at Quadrilatero to enjoy a delicious meal and a drink. Here’s our pick of what to see in Bologna if you are planning to visit this city located in the Emilia-Romagna region.

Why should you visit Bologna?

If you love to visit and explore historical places, then Bologna is the perfect destination for you in Italy. You’ll find here many beautiful historical landmarks, many years old churches. The world’s largest Basilica of San Petronio Church is located in Bologna.

You’ll love the food of Bologna. The cuisine of Bologna is very famous. There are many restaurants to taste local food. You can enjoy the nightlife and visit the local food market to eat and drink good food and wines.

Experiences and top things to do in Bologna

Bologna is a university hub with a huge student population. It is not surprising that one of the significant Bologna attractions is the Archiginnasio di Bologna, the former site of the University of Bologna.

Today, this 16th-century building houses the municipal library and the Anatomical Theater. Explore the extensive library with an excellent collection of books, including 16th-century editions.

Another must-see here is the Anatomical Theater with its superb woodwork, sculptures, and statues of Hippocrates and Galen as well as Bologna plastic surgery pioneer Gaspare Tagliacozzi.

While the sanctuary is pretty and peaceful, it is the long walk leading up to it through the porticos that makes it interesting. Of course, you can always take the road or the special train to the Sanctuary of the Madonna of San Luca if you do not wish to walk.

If you choose to walk, the porticos with paved stretches and steps provide cover from the heat. These porticos are a lovely aspect of Bologna sightseeing.

At the serene sanctuary, you can see frescoes, statues, and other artwork. You can also climb to the top of the sanctuary for beautiful views.

Foodies, rejoice! In between visiting the tourist attractions, make sure you savor all the delectable food in Bologna. It is famous for Parmigiano-Reggiano, and prosciutto as well as tortellini, mortadella, and tagliatelle with ragu.

The city has several restaurants, cafés, and markets where you can enjoy the delicious cuisine, including those in Piazza Maggiore. You can also visit the Quadrilatero where the streets have food-centered stalls, shops, and cafés.

All kinds of delicious produce and tasty food are lined up enticingly. Now you know what to do in Bologna when hunger pangs strike!

Top Landmarks and attractions in Bologna

At one point in time, there were supposed to be seven churches in the Basilica of Santo Stefano complex. However, only four remain today.

You can also visit Pilate’s Courtyard and a museum with works of art, sculptures, and religious items. Its unique ambiance makes it one of the top Bologna tourist attractions.

Do you know what to do in Bologna on a beautiful day? Head to the Piazza Maggiore, a large public square with fascinating attractions as well as restaurants and cafés.

Enjoy the vastness of the square where the Basilica of San Petronio is located along with other buildings from the medieval period, including the Palazzo del Podestà and Pallazo d’Accursio.

Another popular attraction in the vicinity is the Fountain of Neptune. You can explore any of these places or relax in a restaurant/café, enjoy the vibe, and watch the world go by.

Built-in honor of the city’s patron saint, the Basilica of San Petronio contains the relics of Saint Petronius. It is one of the largest churches in the world and is unfinished.

You can make this out when you view the façade that has a marbled lower portion containing small sculptures that are in contrast with the incomplete brick-built upper portion. When you enter the church, you will get an understanding of its size.

The basilica also contains 22 chapels making it among the most exciting places to see in Bologna. There is a bit of astronomy in the church, too, as it includes a meridian line that marks days of the year.

An artistic and quirky fountain near Piazza Maggiore, the 16th century Fountain of Neptune, is one of the beautiful things to see in Bologna. Rising from a foundation of steps, the fountain is decorated in each corner with four curvaceous sea nymphs and other ornamentation.

You can see a massive statue of Neptune towering above the fountain with his trident in one hand, while the other hand is held aloft.

Fun fact: Car manufacturers Maserati took inspiration from the fountain’s trident while designing their logo. Seeing the fountain is one of the delightful things to do in Bologna.

Book and history lovers looking for places to go in Bologna must visit the Biblioteca Salaborsa, a public library in the city. Housed in the medieval Palazzo d’Accursio, the library has a vast collection of books for adults, teens, and children. Book readings and activities for all ages are also conducted in the library.

A plus point is an access to computers with free internet. Another major highlight besides the books is the Roman ruins beneath the building. You can see them on the floor of the library!

If you are thinking of what to see in Bologna related to religious places with incredible artwork, the Sanctuary of Santa Maria della Vita is one such lovely site.

A façade topped with a beautiful dome and remarkable interiors, the church has several notable features. Take a look at one of the most striking attractions in the sanctuary – Niccolò dell’Arca’s ‘Sorrow over Dead Christ.’ It is a group of terracotta sculptures that adequately convey the grief over the death of Jesus.

You can also see a magnificent set of terracotta figures by Alfonso Lombardi in the oratory. Definitely one of the top Bologna attractions.

Did you know that there are other leaning towers beside the one at Pisa? In fact, Bologna has not one but two leaning towers – Asinelli and Garisenda – that tower over the city. You now know where to go in Bologna for spectacular city views.

Despite man-made and natural disasters, these towers still stand today. Tourists can climb the Asinelli tower, the taller of the two towers at 97 meters. It was used over the years for several purposes, including astronomical studies, and as a watchtower during World War II.

If you wish to see the sights from the tower, you will have to climb around 500 steps (some steep) to reach the top! Reserving your tickets in advance is essential.

One of the best places to visit in Bologna for music lovers is the Tagliavini Collection in the seventh century San Colombano church complex.

You can take a unique guided tour here where each of the musical instruments is played to showcase its sound. These instruments are also used occasionally for performances or concerts on the site. The Tagliavini Collection is one of the Bologna tourist attractions that provides a truly delightful experience.

For Bologna activities related to museums, visit the Bologna Archaeological Museum that has a wide range of exhibits. Situated inside the Palazzo Galvani, a fifteenth-century building, the museum has a fabulous variety of exhibitions from different periods of history.

Prehistoric, Etruscan, Greek, and Roman are some of the sections here. Currently, the first floor is under renovation and is expected to open sometime in 2019. However, you can still see a part of the exhibits, including the Egyptian collection and the lapidarium.

Armed with this list of what to see in Bologna, you can start planning your itinerary. With so many fascinating things to do in Bologna, the city will surely work its magic on you!

Where to stay in Bologna? I Portici is a 4-star elegant hotel and features all well decorated and furnished rooms and suites. The interior design of the entire hotel is very stunning. The popular attractions Piazza Maggiore square and the Towers of Bologna are very near to the hotel. Grand Hotel Majestic gia’ Baglioni is the oldest 5-star hotel in Bologna. The artistic Grand Hotel offers all luxurious facilities, and every room and suite decoration is classy and gorgeous. The popular attractions San Petronio Basilica and Towers of Bologna are very near to the hotel. 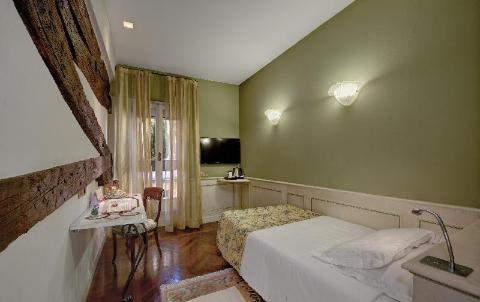 The 5-star Art Hotel Commercianti located in the main historical center of Bologna. Historical landmarks, museums, theatres, and shopping centers all are within a walking distance of the hotel. All rooms and suites are well furnished and offer all comfort and facilities to their guests.

Check out these activities in Bologna

Scroll back to top
Share via
Facebook
Twitter
LinkedIn
Mix
Pinterest
Tumblr
Skype
Buffer
Pocket
VKontakte
Xing
Reddit
Flipboard
MySpace
Delicious
Amazon
Digg
Evernote
Blogger
LiveJournal
Baidu
NewsVine
Yummly
Yahoo
WhatsApp
Viber
SMS
Telegram
Facebook Messenger
Like
Email
Print
Copy Link
Powered by Social Snap
Copy link
CopyCopied
Powered by Social Snap
We use cookies to ensure that we give you the best experience on our website. By accepting this, you're giving us permission to use your data to improve our user experience. If you have further questions how we use your data, please read our disclaimer and privacy policy for more information.I acceptRead Disclaimer