The ‘low countries’ in medieval times were a range of around 17 different provinces, which were located in various states of disharmony. Notably, the Northern Belgium, previously the county of Flanders, had a lot of prosperity and wealth. To have control over this unstable location and to protect its property and land, a lot of castles in Belgium were built.

Out of hundreds of chateaus and fortifications, we have handpicked the best castles in Belgium. Luckily, an excellent public transport network makes it easier to reach.

Located on the Meuse River, the Castle and Gardens of Freÿr sur Meuse are well known for terraced gardens, rich history, and Renaissance-style design. It looks much like the chateaux of Loire Valley in France. In the province of Namur, you can find it right here in Wallonia, Belgium. The Freÿr castle is a leading heritage site of Wallonia and a prominent part of the history of Belgium.

The same family has used this castle for over 20 generations, and some members still live in a part of this royal palace of Brussels. The oldest section of this castle was built in the year 1571 on an area of a keep in the Middle Ages, which had been damaged in the wars over Charles V.

The three wings have been added to the castle in the 17th century to form the square. In 1760, one side was finally torn down and replaced by a beautiful iron gate. It is still in the same form today.

Read also: Top Tourist Attractions and Things to do in Brussels 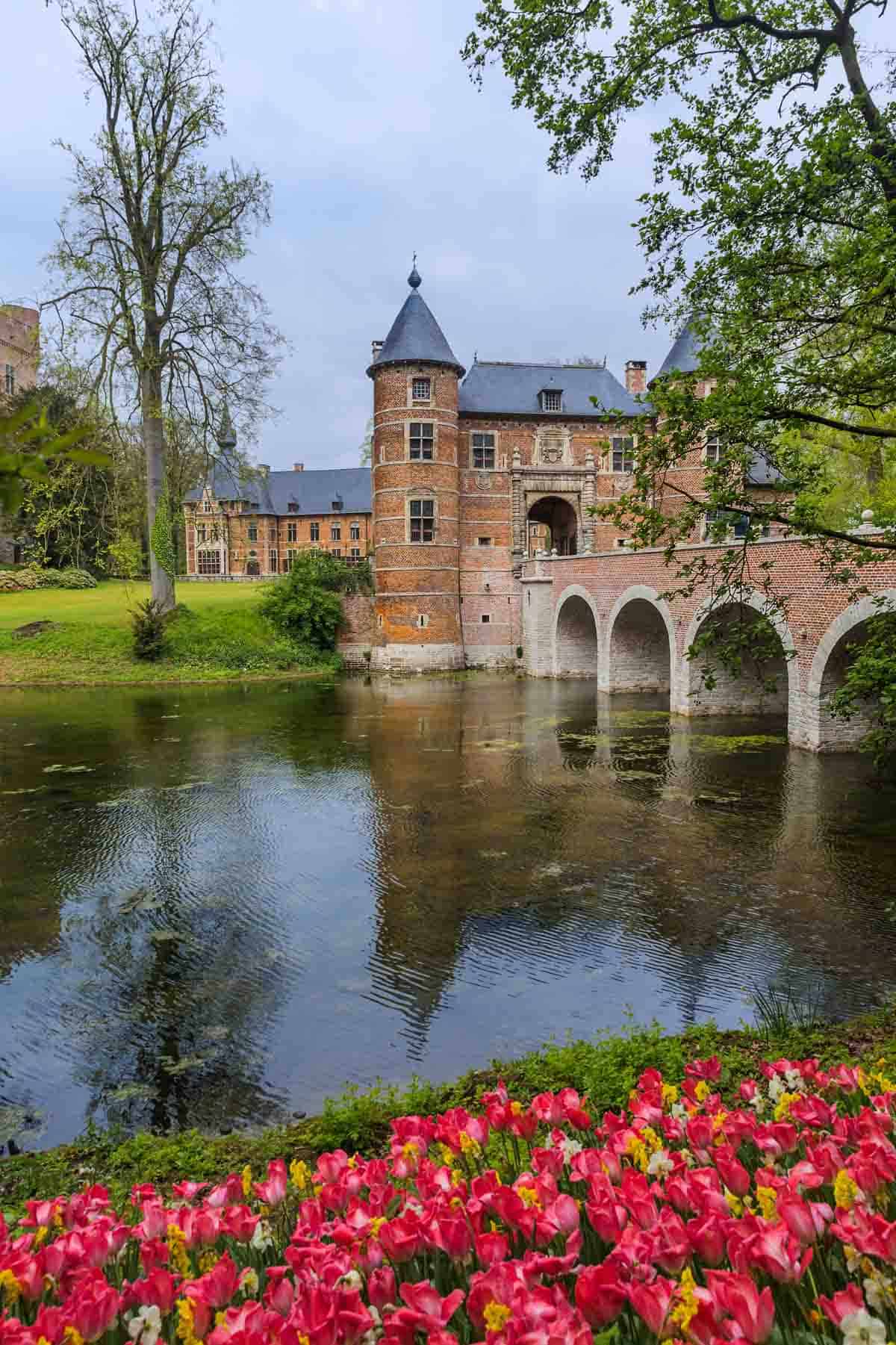 Chateau de Grand-Bigard or Groot-Bijgaarden Castle is located on the outskirts of Brussels. The park is open only for one month for the public in the spring. Over 1 million spring bulbs bloom, and there is a range of colors seen during this period. More than 50000 visitors gather here in this 14-hectare garden, even though it opens for a limited period.

Like Keukenhof, its larger sibling in the north, the tulip is the most predominated flower in this garden. Every year, more than 400 varieties of flowers are planted. It also has the hyacinths, daffodils, violets, rhododendrons, and azaleas with flowers like tiger lilies and calla blooms in the exhibit region.

This Brussels castle has two of the most picture-perfect subjects –architecture and gardens. Along with picturesque spring flowers, it also has a beautiful castle and tower, circa 1000.

Located in Ghent, the Gravensteen castle was built by count Philip of Alsace in the Middle Ages in 1180 and was modeled after the crusade castles which Philip of Alsace observed when he took part in the second crusade.

The castle was also the seat of Counts of Flanders until it was left abandoned in the 14th century. Then, the castle was used as a prison and courthouse, and it was decayed over time. It was once utilized as a factory. The palace was handed over to the city of Ghent, and its renovation had started in 1885.

The recently built houses were removed, and the keep and walls were restored to their previous state. The castle houses a lot of torture devices in its museum.

→ Where to stay: Best hotels in Ghent

Read also: Top Tourist Attractions and Things to do in Ghent

This castle has been the seat for the Prince’s de Ligne, one of the top-ranking noble families of Belgium in 1394. However, the castle was even older and its history dated back to the 13th century.

This fortified castle has been turned into a lavish country house. The interiors have great art collections and the most elegant furniture of the family. The mansion was burned down due to a disaster in 1900 during New Year’s celebrations. With the library having 20000 rare art collection and volumes, a lot of furnishings were restored.

The current state of this medieval fortress comes from the transformation of it to a royal residence dated back to the 17th and 18th centuries.

→ Where to stay: Best hotels in Beloeil

The fortress of Ooidonk was previously built in the 1200s to protect the city of Ghent. It faced destruction a lot of times, but it was last rebuilt when it was burned down in the year 1579. Martin della Faille, an Antwerp-based notable, and a leading merchant who was trading across Europe owned the land and ruins.

Also known as Antwerp castle, this castle was rebuilt in Renaissance style, and it turned into a residence in Hispano-Flemish manner.

The castle was protected in 1944 as a monument. Other constructions in 1980 were also classified, and all of the fields in 1995. You can visit the castle from April 1 to September 15 and tour the French garden all year round.

The privately-owned palace has opened only the castle grounds to the public. But it is still a picture-perfect destination, and the gardens are very stunning during Summer and Spring.

→ Where to stay: Best hotels in Ghent

Dated back from the 1300s the castle is not that picturesque at the moment. Kasteel van Gaasbeek is going through a lot of renovations that started to drain the moat, but the foundations are still being repaired. The round fortress was built to protect Brussels and has three watchtowers. It is a beautiful sight to behold, and it will soon be entirely restored to its previous glory.

If you are a big fan of a famous Belgian comic series De schat van Beersel, you may undoubtedly know about this Beersel castle. The Treasure of Beersel also houses an annual medieval festival which includes music, knights jousting and food and it is ideal both for adults and children.

It is a great recreation spot and park built on the lands of the Castle of Huizingen. This chateau houses a brasserie and fine-dining restaurant. It is an ideal place to enjoy a warm afternoon in summers.

Le Roeulx village produces the well known St. Feuillien beer out of which St. Feuillien Triple was ranked among the most renowned pale ale and awarded well by the World Beer Awards 2009.

The origins of Le Roeulx seigneury are mysterious. In the 11th century, it was known that Le Roeulx was among the 12 peerages of Hainaut County. The son of Baldwin II (1056-1098), Arnold was the first lord, and Eustache II, Count of Flanders and Hainaut, Arnold’s son built the stone castle with a lot of towers, and some of them still stand in the northwestern part of the castle.

Son of the preceding, Eustache III joined the Third Crusade. Le Roeulx’s lordship returned to the Counts of Hainaut as Eustache III died without posterity. However, the castle opens only once a year to host a hot air balloon tournament.

Perched on a rock, the Domaine Du Château De Modave is located atop 60m off the Hoyoux River in the Liège province of Belgium. The oldest segment of this castle dated back from the 13th century but the complex was reconstructed in the middle of the 1600s.

Jean-Gaspard-Ferdinand de Marchin was the owner of the castle throughout the 1600s, and it is also called as Château des Comtes de Marchin.

Several noble families had owned Château de Modave over the years until Brussels Intercommunal Water Company bought it in 1941. The company opened Modave to the public and has restored it.

The Modave castle is located off the Wallonia. You first need to go through the city of Huy and visit the Modave village where you drive towards the rock where the castle is positioned.

Read also: What to Pack for Winter in Europe + Printable Ladies Packing List!

Built in the 11th century, Alden Biesen Castle was among the 12 principal seating places of the Teutonic Order of knights and was the center of attraction of the region. Its current state has been dated back from the 16th century. Located around the Rhine and Maas rivers, its position has made it a prominent castle in the 18th century.

The heyday of Alden Biesen ended during the French Revolution. The castle was auctioned after the ejection of the Teutonic Order. The palace was abandoned in 1971 as it was set on fire. And finally, the Belgian government-owned Alden Biesen and recovered its lost glory.

Nowadays, Alden Biesen castle is a cultural heritage of Flemish rulers with a vast conference hall. It hosts a lot of events all year round like plays, art exhibitions, musical performances from rock to opera, Fleuramour flower event, Scottish Weekend, horse show, and Global Storytelling Festival. It has a small museum explaining the history of the castle and is also a significant attraction for the tourists.

The castle has stunning architecture, especially the ‘water castle’ moat. The French Garden is one of the most picture-perfect areas of Alden Biesen. This beautiful garden is almost dotted with roses. You can visit the garden and embrace its beauty for as long as possible.

Read also: 30 Fairytale like Towns and Places to Visit in Europe (That Will Tickle Your Wanderlust!)

Also called as Chateau de Noisy, Miranda Castle or Chateau Miranda was a neo-Gothic castle built in the 19th century in Celles at the province of Namur in the area of Ardennes. The palace has been entirely demolished since 2017.

In 1866, the castle was built by Edward Miner, an English architect, under the family of Liedekerke-De Beufort, after leaving Veves Castle, their last home, during the French Revolution. Before the construction of Chateau was completed in 1907 when the clock tower was also ready, Milner died.

Until the Second World War, their descendants used the palace. A part of the Battle of Bulge happened n this castle. Miranda castle in Belgium was occupied during that time by German forces. Miranda Castle was called Chateau de Noisy in 1950 when the National Railway Company of Belgium took the cover of the castle and used it as an orphanage and a holiday camp to treat sickly children until the late 1970s.

Since 1991, the castle remained abandoned and vacant due to significantly high costs of maintenance and the family also couldn’t find the investors who could be interested in this property. However, the family refused the offer from the municipality of Celles to take over the castle. As a result, a lot of giant structured remained in a derelict position and vulnerable to vandalism and decay.

The structure was partially damaged as it was set in fire and a lot of areas of the ceiling started to collapse. But it is still the hottest favorite destination for urban explorers and history lovers. The castle has been demolished in October 2017.

The makers of Hannibal, an American TV series, use this castle as their shooting location. It is portrayed as Lithuania’s Castle Lecter. A Belgian film “Het huis Anubis en de wreak van Arghus” (The revenge of Arghus and the house of Anubis) has also featured this castle.

→ Check out these activities in Belgium

2.1K shares
Top 15 Iconic and Beautiful Castles in England (The UK)
← Previous
Top 9 Must-See Castles in the Netherlands
Next →