Have you ever been to a continent that offers such diverse cultures, traditions, and fascinating history?

Asia is known for many amazing things, and you’ll see many travelers spawning around the continent to see some of the best places to visit in this marvelous place.

However, the question is, where to go to this beautiful place? It is the biggest continent in the world; after all, there must be tons of amazing destinations!

Indeed, Asia is massive, and choosing where to go is a tough call. This is why we compiled this Asian travel bucket list, where we compiled a collection of the best cities to visit in Asia where you can choose to start your amazing trip!

Looking for an exotic destination? Check out these top places to visit in Myanmar and learn about some of the best and exciting things to do in Asia.

It is a province of the Philippines lying in the Central Visayas region. It comprises of 167 stunning islands and islets along with its central island. The long pristine sugar-white sand beaches accompanied by crystal clear blue ocean water and the gorgeous coral reefs covering the entire Cebu Island gives a perfect holiday trip look.

It is the prominent destination in northern Thailand and one of the famous cities in Asia. The Old Chiang Mai is an architectural wonder here housing 300+ beautiful temples, museums, ancient city walls, and plenty of other heritage sites.

Located in the western part of the Lesser Sunda Islands in Indonesia, Bali is among the most visited cities in Asia by the tourists. The beautiful Indonesia archipelago is home to some of the stunning beaches, towering Volcano peaks, gorgeous temples, breathtaking scenic beauty, and dreamy beach stays to engage in water adventure activities like diving, snorkeling, and kayaking. On top of this, there are also tons of holiday villas in Bali at affordable prices for those who want to experience the island life at its best!

It is the capital city of Malaysia and ranks among the top cities in Asia. It is the most significant economic and industrial hub of Malaysia filled with dazzling skyscrapers, colonial architectures, headquarters of the world recognized corporations, luxury hotels, fine-dine restaurants, bars, nightclubs, food streets, and exciting shopping destinations.

It is famous as the historic World Heritage site of Vietnam. The old city preserves the historical architecture of the 15th to 19th century through its streets, buildings, and Southeast Asian trading ports.

Some of the most beautiful attractions in Hoi An are – Hoi An city tour, An Bang Beach, Hoi An handicraft workshop, Tra Que Vegetable Village, Fukien Assembly Hall, Japanese Covered Bridge, Kim Bong Carpentry village, Cam An Beach, Hoi An Night market, Hoi An Ancient Town and many more.

It is a beautiful city situated in the north-central part of Laos. The old town of Luang Prabang is the heritage location consists of breathtaking French Colonial structures, 33 beautiful monasteries, and a panoramic scenic view of Mekong River following through the city. It houses the world-famous 83 cm golden statue of Lord Buddha, who is believed to be the protector of the town.

It is a famous city in Japan in the Kansai region and also the capital of Kyoto Prefecture. It is referred to as the most beautiful city in Asia as well as Japan. The city has a mesmerizing mountainous scenic backdrop and houses more than 4,000 historical structures, shrines, temples, with gorgeous ancient landscapes and street patterns.

It is the capital city of Japan and also features among the best cities to visit in Asia. Not just that, Tokyo is also famous as the biggest city in Asia. The city is a hub of beautiful temples, attractive shopping destinations, dazzling skyscrapers, cultural centers, economic joints, plenty of museums, and envious green gardens.

Famous as the city of Lakes, it is one of the best Asian cities to visit in India in the state of Rajasthan. From mesmerizing tranquil lakes to breathtaking palaces, Havelis, royal gardens, and museums, you get to experience Indian history at its best in Udaipur amidst the painted backdrop of Aravalli Mountains. 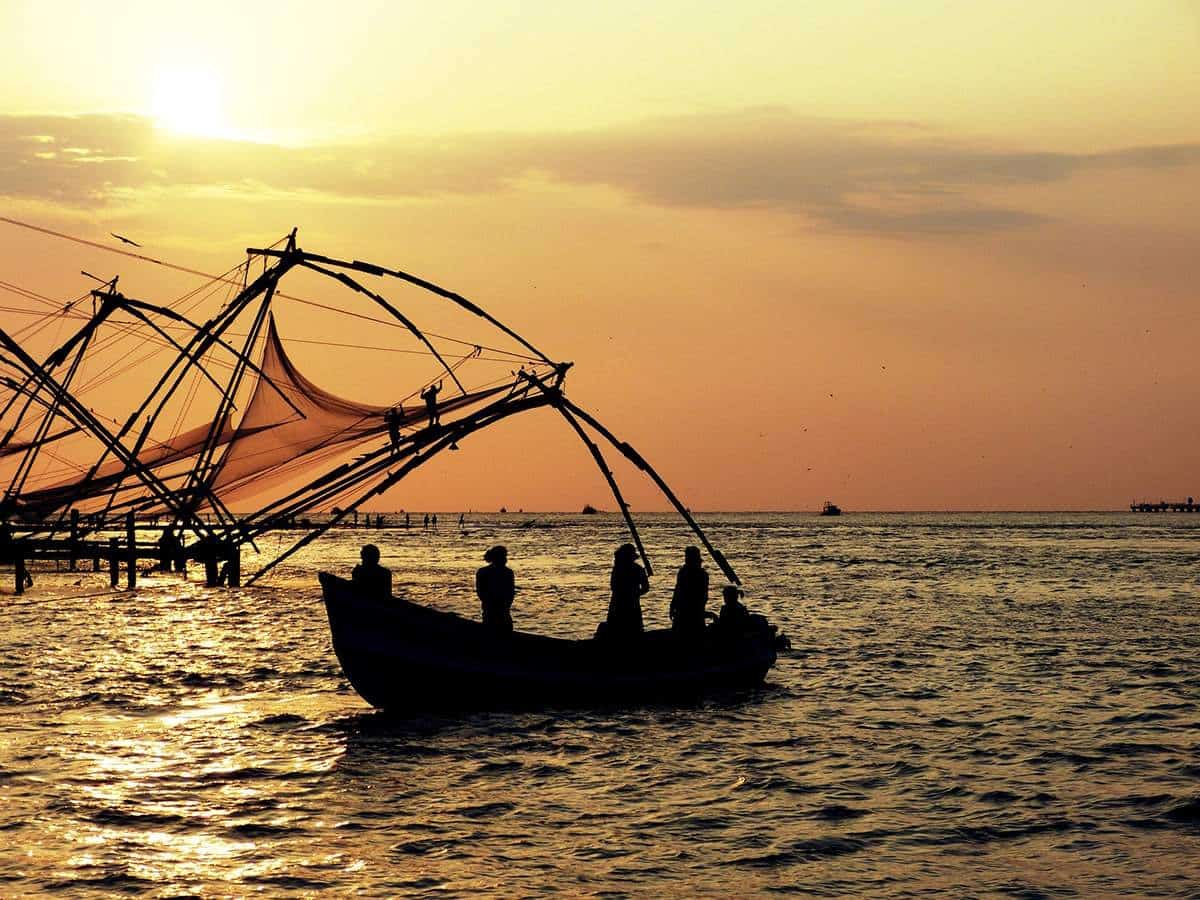 It is a beautiful port city of India in the state of Kerala, having its borders on the Lakshadweep Sea. It is a popular tourist hub for the past 600 years. Here you can spot many houses from the Dutch era, ancient mosques, and numerous small beautiful islands on the shores of the Arabian Sea.

Remember that before you enter India, you need to apply for a visa beforehand – read our online India e-tourist guide!

It is the administrative center of China and is widely known as the most significant economic center across the world with the highest per capita income. It tops in the list of best cities to travel in Asia due to its beautiful tourist attractions, luxurious shopping destinations, and lip-smacking Chinese and Cantonese food.

Note before you decide to visit, you can apply the online visa for Hong Kong if you require one!

It is the capital of the northwestern part of Cambodia in the Siem Reap Province. The city is famous for its majestic temples of Angkor Wat that draw the maximum tourist crowds.

It is a significant tourist attraction in Sri Lanka and one of its prominent cities. It is also a major religious destination for the Buddhist community people, as it is believed to house the sacred tooth of Buddha, which is popularly known as Kandy.

From Kandy, you can also head a bit more south and take a scenic train ride to Nuwara Eliya and Ella, where you can also book some nice holiday villas in Sri Lanka to soak in the marvelous mountain views!

It is the capital city of UAE that is built on a small triangular peninsula off the Persian Gulf Coast. Abu Dhabi has a cosmopolitan environment of the city with a cultural touch having mesmerizing Islamic architectures and pristine coastlines are what draws the tourist crowd to this location.

It is among the best Asian cities to visit with plenty of tourist attractions. Some of them are – Sheikh Zayed Grand Mosque, Global Village, Heritage Village, going on a desert safari, and many others!

It is the capital city of Taiwan, having a perfect blend of Chinese, Japanese, American, and Southeast Asian cultures. The city has got a powerful combination of traditional and modern architecture, having age-old ancient temples, 5000-year-old museums to modern fine dine classy restaurants, bars, and shopping malls.

Some of its best sightseeing attractions are – Scenic views of Taipei from Elephant Mountain, 83rd Floor Taipei Observatory, Day trip to Jiufen, Visit Baishawan Beach, hot springs of Wulai Valley, Train ride to Shifen Waterfall, hiking at Mount Keelung and too many other attractive locations.

It is the largest metropolitan and capital city of South Korea. Seoul is known for its best tourist hospitality and decorum. The city has got everything from modern skyscrapers to pagodas and beautiful palaces. It is the most significant cultural and financial center of South Korea.

From Seoul, you can travel to numerous beautiful locations nearby. Some of the famous attractions in Seoul are – Gyeongbokgung Palace, Gwanghwamun Square, Changdeokgung Palace, Bukcheon Hanok Village, N Seoul Tower, and Myeongdong shopping district.

The cosmopolitan capital of Thailand, where party, culture, and tradition meet in one. If you’re into a buzzing city where you can still find some of the marvelous temples to visit, stalls after stalls of street food where you can snack, and hip pubs where you can enjoy a good party – Bangkok is for you!

Some of the top attractions are – The Grand Palace, Temple of the Emerald Buddha, Wat Arun Ratchawaram, Khaosan Road, Weekend Markets, and The Golden Buddha, to name a few. Come for a short visit to see this beautiful city in Asia.

It is one of the top cities to visit in Asia, which lies in the southeastern part of the continent and is both an island city-come-state. The city is home to green skyscrapers, treetop jungle bridges, forest areas, and the famous Botanical garden.

The city is constantly thriving to a green environment having plenty of high-end shopping malls, fashion stores, art galleries, and incredible food destinations.

It is the most prominent city located in the southeastern part of Vietnam. It is the most significant economic center of Vietnam and a famous tourist attraction. From classic French architectures to beautiful Pagodas, temples, and glamorous skyscrapers, the city has it all to entertain the tourists.

It is the capital of Vietnam and ranks second in Vietnam in terms of population. The city lies on the banks of Red River and serves as a visual treat to travelers with plenty of colonial architectures, age-old pagodas, and ancient museums. The city is also famous for handicrafts, vibrant nightlife, beautiful hilly destinations, lush green greeneries, picturesque traditional villages.

The 1,000 years old quarter of Hanoi is its prime attraction where you can explore the best of its history with a local guide and stroll around in its charming surroundings.

What is the best city in Asia?

This is debatable depending on who you ask. However, the most visited city in Asia is Hong Kong while the cities that are the most popular amongst tourists are the following:

What is the best country in Asia to visit?

Each country in Asia is vastly different from each other so the best country highly depends on your interest as a traveler. However, some of the notable countries that are worth the visit are Japan, Korea, Taiwan, India, Thailand, and Sri Lanka (in our opinion).

What is the best country to visit in Southeast Asia?

There are so many amazing countries in Southeast Asia making it hard to narrow it to just one. But the most popular ones amongst tourists are Vietnam, Thailand, and Cambodia.