Top 6 BEST Things to do in Pärnu (Estonia)

Pärnu is Estonia’s fourth-largest city on the coastal lap of Pärnu Bay, which is also a supporting arm of the Gulf of Livonia in the Baltic Sea. The coastal city of Pärnu is also flanked by the banks of Pärnu River flowing through the city.

The city has been a part of World War I and II with a major historical military background. You can reach Pärnu by air from any Estonian city by traveling to the Pärnu Airport. To reach Pärnu by railways, you can get multiple trains from Tallinn. For road travel, you can take buses from Tallinn, Viljandi, Tartu, Kuressaare, Valga, and even from Russia’s St. Petersburg.

Pärnu is a perfect summer holiday destination having lustrous long sandy beaches with beach promenades, spas, restaurants, and numerous tourist accommodations for a relaxing trip. The gorgeous Pärnu landmarks and its medieval setting lure tourists from different parts of the world.

It also offers wonderful opportunities for water skiing, canoeing, boating, etc. Therefore, if you are looking for an exotic beach vacation, this travel guide is here to help you with the best places to visit in Pärnu and things to do in Pärnu.

Top 6 BEST Things to do in Pärnu (Estonia) 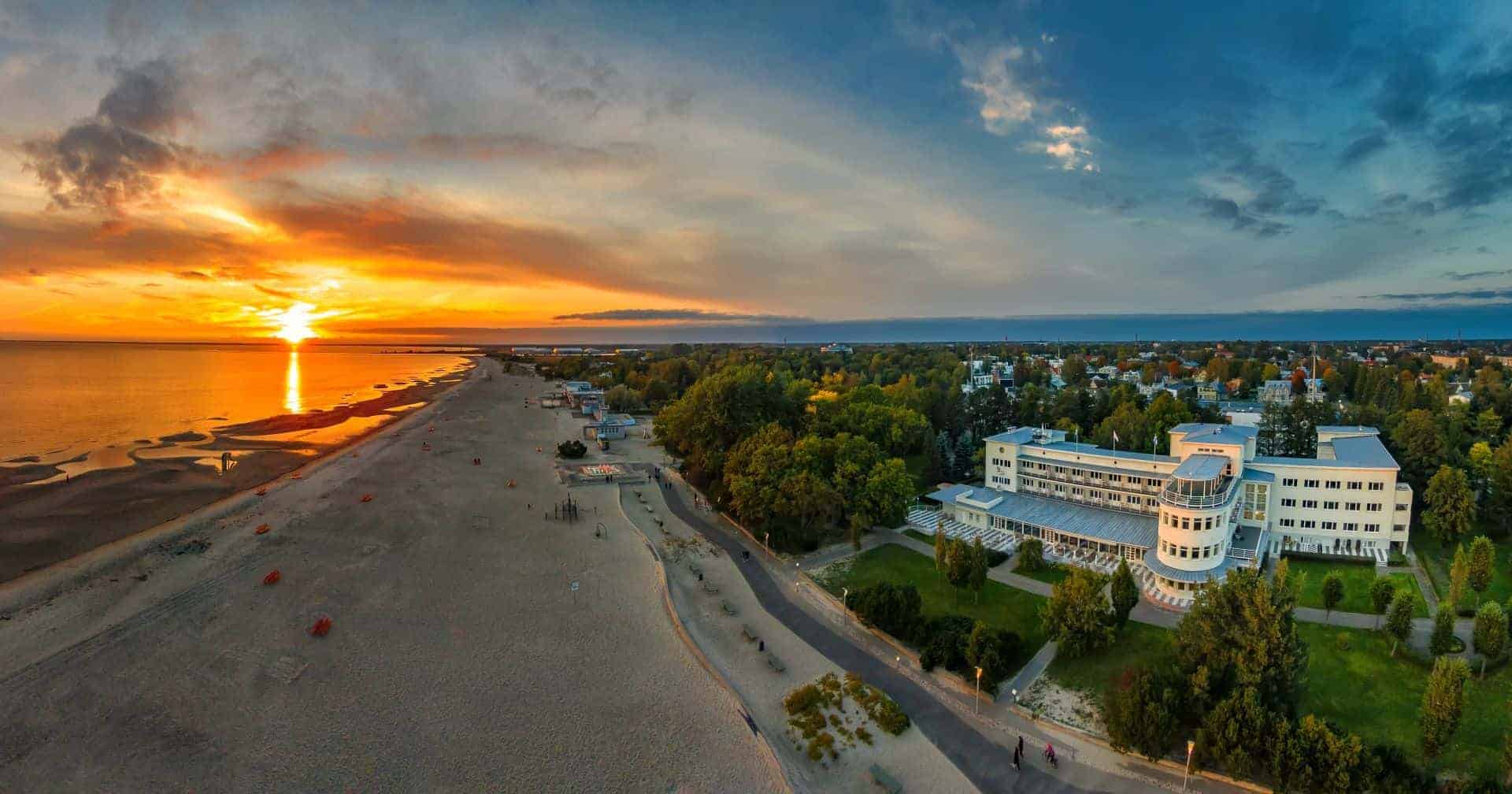 Pärnu beach is not just a major tourist attraction in Pärnu, but it is also considered as the finest beach in entire Estonia. The beach itself looks like a lively small world in Pärnu,  this is the perfect place to visit in summer and one the best thing to do in Pärnu.

The water level of the beach is shallow so it can be enjoyed thoroughly by all age groups. In addition, it features various fun attractions like water surfing facilities, mini-golf, swings for kids, and so on. You can also explore the Ranna pst avenue close to the beach housing 20th-century buildings as well as the garden areas of Rannapark.

Located in between Pärnu and Viljandi County, the Sooma National park is a picturesque wetland area and one of the best spots in Pärnu sightseeing.

The lush green forests of Sooma are famous for its great floods when due to heavy rains and melting snow water, the entire wetland area including the forests, roads, and yards gets flooded. Sooma offers a wide range of activities in Pärnu for the visitors.

You can go for canoeing in the Sooma national park rivers amidst the envious greeneries and untouched forests; a guided bog shoeing trip into the wilderness through the Riisa village to the largest Estonian pit bog ‘Kureso’ or opt for the adventurous night safaris amidst the calmness of the pristine jungle with high chances of wildlife watching. It is a highly adventurous destination and is indeed one of the fun things to do in Pärnu.

This Pärnu museum is among the best things to see in Pärnu. It takes you through the roller coaster ride of the past 11,000 years of history. It gives you a detailed picture of how the Pärnu city evolved from the ancient Stone Age to medieval, baroque, and Soviet-era to the current modern world through different exhibits and art.

It also houses a mini theatre showing films from the historic period. Some of the main attractions of the museum are- Statue of ‘Stone Age Madonna’ which is an 8,000 old sculpture, a merchant ship from the period of the 14th century, and a glass floor showcasing the ancient remnants of Pärnu city. All history lovers should visit this museum.

This is another biggest tourist hotspot in Pärnu. The name also knows it of ‘Red Tower’ in today’s era. It is a granite tower-like structure with a red brick roof which gives the name of the castle as the Red Tower. The 15th-century tower or castle initially had four stories with a 6-meter deep terrible dungeon and prison cell.

Currently, it has the remnants of only three stories. The heritage structure, which once used to be situated on the town’s edge, now, lies in the central location in close vicinity to the Old Townhall. The current castle area now features a beautiful garden, which often hosts different Estonian art exhibitions.

If you are already visited the above sightseeing locations and wondering what to do in Pärnu more; pay a visit to this beautiful church.

The church belongs to the Lutheran community, which is a Western Christianity group. Russian Empress ‘Elizabeth’ constructed the present structure of the church on the donation of 8,000 roubles in 1741. Hence, the church was named after her, and the entire construction work got finished in 1747.

The church brightly glorifies the Estonian Baroque architecture with Neo-gothic interiors and gothic style wooden pulpit from 1893, which was created by the Riga artist Hausermen. The altar was established in Rotterdam in 1854 while the church organ is from the period of 1929. Further extensions were done in 1995 by Ra Luhse.

It is a beautiful romantic destination in Pärnu in the Pärnu beach area. It is a gorgeous promenade made of boulders that stretches for a mile meeting the sea. The current construction of the seawall is from the period of 1863 while the former one lies underneath the existing seawall, which is from the period of the 17th century.

The former one was built by the Russian empress Catherine, which is still visible during the low tides. The seawall has different legends associated with it. Some say that lovers who walk holding hands together on the seawall and kiss at its end remain together forever.

While some say, it was built for an older woman who wanted to be closer to the Moon and stars. It is currently a significant attraction in Pärnu, especially for couples.
Vallikaaru

It is another beautiful landscape in Pärnu, which is an illuminated promenade by the beach shore. It is also famous as the romantic pedestrian bridge in Pärnu. In the daytime, the promenade looks beautiful with vibrant greeneries intercepted by different kinds of trees and bushes with envious green meadows.

Whereas in the nighttime; it dazzles like a shining star with various colorful lights. It houses a moat, which features the tallest fountain of Estonia. It also features an ancient wooden lighthouse and a canon. Today it is a great picnic spot and even an open amphitheater for several cultural events.