Top 10 Places to Visit in Bosnia and Herzegovina

Bosnia and Herzegovina is a real gem of the Balkan. Everything about the country is beautiful. From the breathtaking Una River to snow-kissed summits of Dinaric Alp – the beauty of nature is aplenty.

The omnipresent Nature is always there to cast her magic on everyone who visits this country. This list of places to visit in Bosnia and Herzegovina given here in no sense is complete because creating such an exhaustive list is next to impossible.

But before starting off with the list, a quick run through some fun facts about the country would be Nice:

While this list of facts can continue, it makes sense to revert focus on the list of best Bosnia and Herzegovina tourist attractions because that is what was intended in the first place.

It makes sense to start the list of tourist attractions in Bosnia and Herzegovina with Travnik only because it was once the stronghold and capital of this sub-region of the Ottoman Empire.

While the relics of the Ottoman era still stand tall, this town that is bisected by rambling Lasva River is, as of today, a primary attraction for the outdoorsy types.

The town is splattered with monuments and edifices of eastern style and a couple of Ottoman clock towers. The town heart shows off the 15th-century architecture.

Travnik sits on the slopes of Vlasic Mountains, which has gained fame for being Bosnia and Herzegovina’s most preferred hiking, Nordic walking, and skiing destinations. Travel to Bosnia and Herzegovina remains incomplete for the adrenaline enthusiasts until they make their way into this town.

→ Where to stay: Best hotels in Travnik, Bosnia and Herzegovina

Read also: Top 10 Castles in Bosnia and Herzegovina to Visit

Once ravaged and torn apart by cacophonic and riotous conflicts of the 1990s, Sarajevo is today on a collision course with what we call modern age. On the one hand, when the spoils of war still fringe the districts, newfound reckless courage flows through the nerves of the city as the Bosnians define the atrocities that years of war brought.

Arched bridges made of stone, enchanting city parks, museums of modern art, thumping jazz – everything stands in stark contrast to the looming mosques and the remnants of war-torn Bosnia. And best of all, the sinfully delicious food from Turkish restaurants coupled with alfresco beer is something to die for.

→ Where to stay: Best hotels in Sarajevo, Bosnia and Herzegovina

Read full blog posts: Things to do in Sarajevo and Day trips from Sarajevo

Piercing through the dense forests, and free-falling over the edge of cliffs, the series of waterfalls plunging 25 meters down into a lake is one of the most beautiful sights to behold in the country. A perfect destination for the outdoorsy types and the adrenaline enthusiasts, Kravice Falls, is a popular hiking destination.

And for those who love fish, this place is cut out from heaven and installed right here on earth. The grilled fish is so sinfully delicious that one can happily ditch everything else in favor of it.

Swimming in the lake’s shimmering water in the backdrop of frothy white waterfalls is yet another activity that makes the Kravice Falls one of the top tourist attractions in Bosnia and Herzegovina.

Of all the ski fields that are found in Bosnia, Jahorina is by far the best of all. Nestled in Dinaric Alps’ upper levels and spotted by pines, Jahorina once had the honor of playing host for the Winter Olympics.

During the summers, this place is a haven for hikers, and during the winters, it is a skiers’ paradise. 30 kilometers of snow-groomed pistes served both the rookies and the experts alike.

For those who have an unusual affection for history, Orlovaca cave system at a stone’s throw is a place where some pre-historic wonders await.

→ Where to stay: Best hotels in Jahorina, Bosnia and Herzegovina

Travel to Bosnia and Herzegovina rewards the tourists with a rare gem that nothing else in the whole of Balkan Peninsula can match. Yes, Mostar – a small town that screams history from every brick of Ottoman facades, from every crevice of Slavic architecture and every crack in Byzantine ruins.

The most iconic of all is the arched Old Bridge belittling the majestic Neretva that flows right through the heart of Mostar.

The bridge we see today is a reconstruction after the destruction brought down on it by the Bosniak-Croat conflict. The bridge is today a UNESCO World Heritage site.

Roaming through the streets, one comes across the Franciscan churches, mosques with arabesque decorations, and plenty of Oriental designs and Dalmatian builds.

And who could decline the thrill of drinking beer on open terraces overlooking the blue waters of the Neretva? In short, Mostar takes Bosnia and Herzegovina tourism to a whole new level.

For those who embark on Bosnia and Herzegovina travel, Blagaj is an absolute must on their bucket list. Sitting in the depths of Mostar Basin’s rocky gorges, Blagaj takes the spot right next to the point from where Buna River ruptures out into existence from the subterranean depths. The very mouth of the source of Buna is Blagaj’s most famous tourist spot.

For those who want to explore a bit more, they are blessed with visuals of the impressive Ottoman mansions overlooking the Byzantine-style arched bridges and more.

It is more of a cozy town with timber terraces that tuck in the tired travelers in a place of solitude. While it may be a possibility for the daring hero types to plunge deep into the subterranean Buna, it is not recommended.

But yes, the mystery is something that makes people wonder about the actual source of Buna. What makes Blagaj one of the best places to visit in Bosnia and Herzegovina is the Buna spring: it is the whole of Europe’s mightiest spring with super cold water that dances right through the hearts of many villages, etching a surreal image that soothes even the most violent of all souls.

→ Where to stay: Best hotels in Blagaj, Bosnia and Herzegovina

An offbeat natural gem of the country, the Blidinje Nature Park is one of the least-trodden areas that retain the pre-Ottoman Orthodox traditions that Bosnia once had.

The national park is a wide plateau that is responsible for joining Vran and Cvrsnica peaks located at Bosnia and Herzegovina’s south-western edge. The park is famous for the Bosnian pines’ enormous trunks. The place is also known for its thick evergreen forests with whitebarks.

This natural park, which is one of the top Bosnia and Herzegovina points of interest, has meandering cobweb of marked hiking trails that the outdoorsy types and adrenalin junkies prefer most.

Read also: 26+ Best National Parks in Europe You Must Check Out! 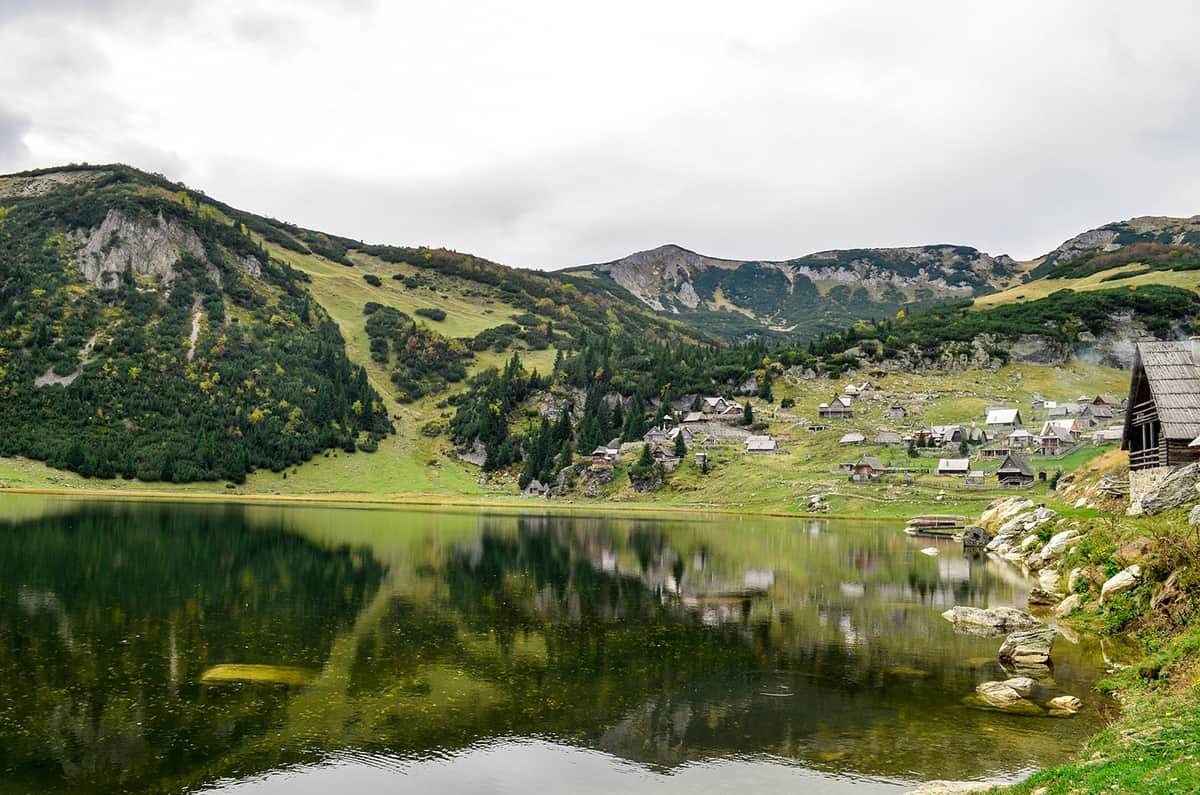 Sitting at the height of 1,600 meters above mean sea level, the Prokoško Lake is a “mountain eye.” Pastoral huts dotting the lush green stretches around the lake and numerous peaks of Vranica Mountains guarding the lake as hooded sentinels – this place is heaven in its way.

Come summer, and the golden sun rays kiss the green grass grazed upon by the bleating sheep and come winter – it switches into something stunning, something that can be rightly called as the enchanting winter fairytale.

This is just an otherworldly place that commands respect and spells love.

In a winter night, sit at the doorstep of a dimly lit mountain hut and look up at the sky dazzled by the stars, there couldn’t be possibly anything more beautiful than you can yearn for.

Located in the southern part of Bosnia and Herzegovina, this beautiful town is only about 30km away from one of the recently popular Dubrovnik or Split. Not only it makes a perfect day trip from Croatia tackling and hitting one bird with one stone tackling two countries in one trip, but Trebinje is also a must not miss destination in Bosnia and Herzegovina.

→ Where to stay: Best hotels in Trebinje, Bosnia and Herzegovina

For about 30km ride from Mostar, you’ll find yourself in this small village in the municipality of Čapljina and located by the bank of river Neretva. This Ottoman-era fortress village is one of the most underrated but must-visit towns in Bosnia and Herzegovina, especially if you’re visiting Mostar as it is easier access than from the Capital, Sarajevo.

Other than that, visit its most iconic building, Gavrakapetan Tower and climb its towers for a beautiful panoramic view of the town.

→ Where to stay: Best hotels in Počitelj, Bosnia and Herzegovina

→ Check out these activities in Bosnia and Herzegovina 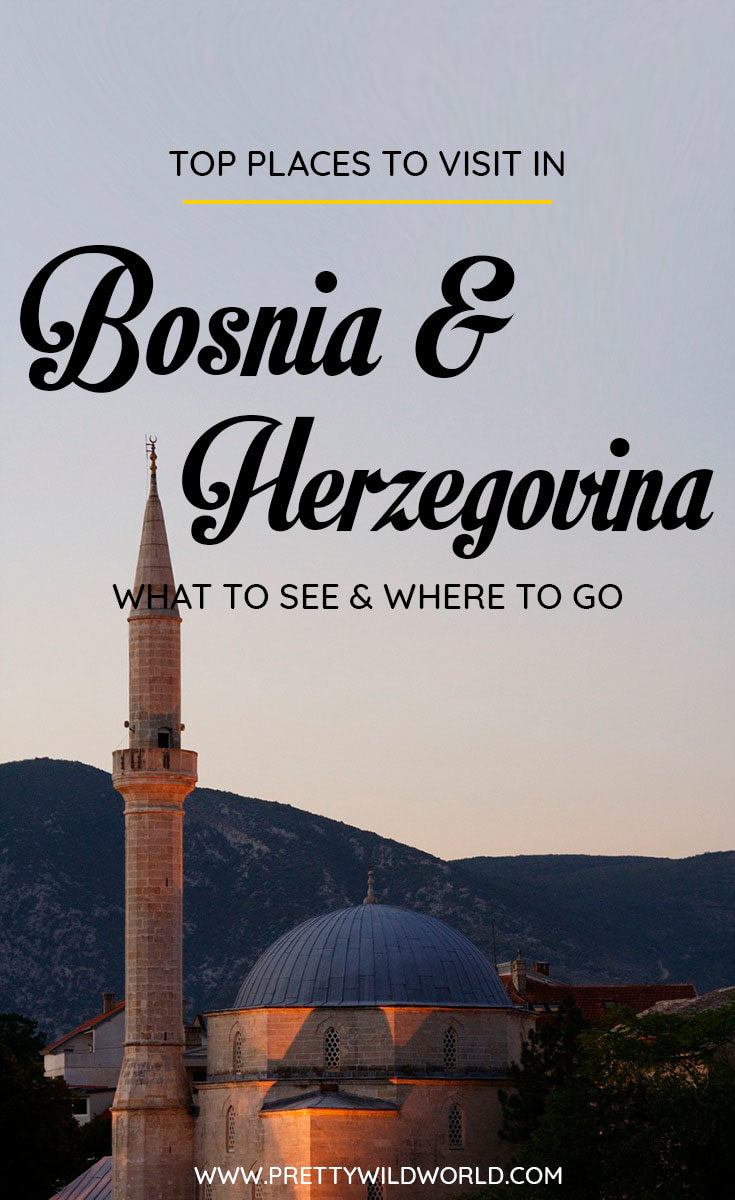