Do you know that there are also other beautiful places to visit outside Monaco? We have compiled the top day trips from Monaco you must check out when you visit this beautiful country! Discover more gems and read this post for more information.

The ever glittering and gorgeous Monaco is a small royal principality which lies on the French Riviera. It is merely two sq km in size and is probably the most stunning stretch of land in the world. It is a serene landmark with graceful palm trees, deep blue sea, and vivid flowers. The rocky, steep promontory Le Rocher (The Rock) is jutting out in the Mediterranean, where the medieval Monaco or Monaco-Ville is located.

It is loaded with narrow and charming streets, and the city dates back to the 13th century when it was founded. Monaco houses the sublime natural and serene beauty with balmy weather and lush greens of the Côte d’Azur. It is located only 30 minutes of a train ride from Nice with the feel of yet another world.

Known for having the highest per capita income in Europe, Monaco exudes extravagance of wealth, which is seen in world-class boutiques, hotels, opulent restaurants, and yachts. Here are some of the best day trips from Monaco.

Facing the exotic azure waters of the Baie des Anges, Nice has always been an inspiration to artists and visitors since the 19th century. It is worth to have a day trip from Monaco to experience the vibrant culture, serene environment, and old-world charm of the Mediterranean Sea. You will embrace the tranquil, paved walkways of the Vielle Ville, its quaint buildings, and lively ambiance.

The palm-fringed Promenade des Anglais is yet another must-see travel destination where tourists and locals can soak up the sunshine of French Riviera and its scenery.

→ Where to stay: Best hotels in Nice, France

The first part of the day trip includes a historic village perched atop the cliffs facing the Mediterranean, where you can start your trips to Monaco.

The next section is Cape Martin, a Mediterranean peninsula where you will spot pebble beaches as well as turquoise waters. Chemin des Douaniers is the coastal walkway that hugs the sea across the peninsula to provide a spectacular view. Then, you can hop on the train from Gare de Carnoles, around 7 minutes to Monaco.

Next stop after Roquebrune-Cap-Martin is Menton, which is very easy to reach from Monaco by taking a fast train in 12 minutes. For a day trip, it is an ideal destination and an idyllic old town, with well-known gardens and a beach. When getting in Menton, Jardin Botanique Exotique is a famous botanical garden, which is a must-see tourist destination. It is open in the mornings and afternoons daily except Tuesday. The Basilica is another famous attraction.

On a day trip, you can get through the vivid streets; keep your camera ready for exotic views of the mountains, frame-ready red roofs, and the Mediterranean; and splash your toes along the sea.

→ Where to stay: Best hotels in Menton, France

Saint-Jean-Cap-Ferrat is located towards the west of Monaco and near Nice. You can easily access this serene peninsula, which is a paradise for the hikers. If you are an avid nature lover, catch the spectacular views of Cap-Ferrat after the humdrum of Monaco.

Chemin des Douaniers is the smooth pathway that passes through the cape, which takes you to several beach cafes and bars to finish your day off. Villa Ephrussi de Rothschild is a chick landmark that is genuinely worthwhile. You will feel fresh at the start of your trip before a hike if you hop here.

Read also: Top 15 The Most Expensive Cities in Europe That Are Still Worth the Visit

Mercantour National Park is located towards the north of Monaco. It is recommended to book a car and leave behind the glamour and glitz of the Mediterranean coast and drive up the mountains to capture the panoramic scene. Stop by the idyllic villages like Moulinet and Sospel to get a glimpse of another Monaco side, in the south of real, rugged, and unspoiled France.

Read also: Top Tourist Attractions and Thing to do in Monaco

It is one of the most beautiful and exotic landmarks in France. It is well regarded to have an old town stretched by its ramparts dated back to the 16th century with its serene and snow-capped Alps, which serve as its backdrop.

The townhouses the wealthy Europeans who have been inspired by its tranquility. It has captivated Picasso, who lived here for six months in the 1940s. It is also effortless to get there. Antibes is located on the same coastline as Monaco but only further west. You can quickly get there within an hour. Enjoy the morning in the old town and walk through the star-shaped Fort Carre and harbor.

→ Where to stay: Best hotels in Antibes, France 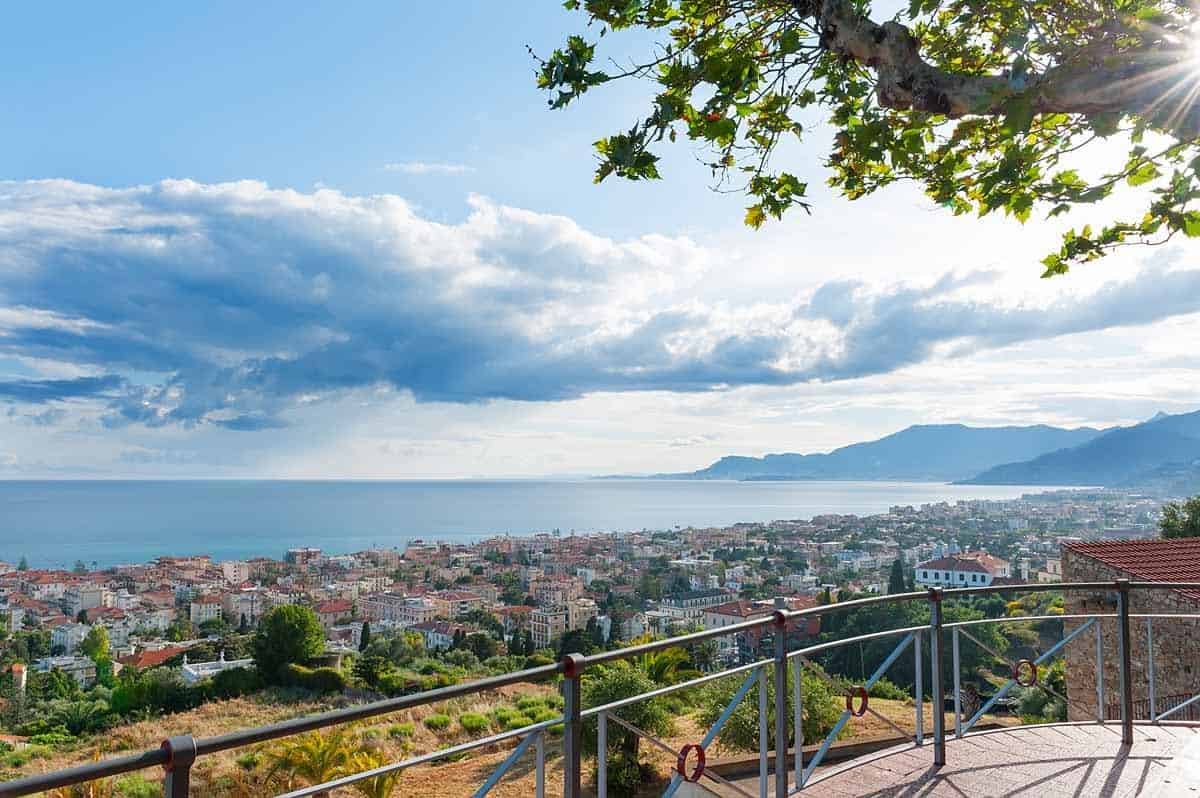 Going to Italy is as simple as going to France for a day trip because Monaco is located close to Italy. Bordighera is a little coastal city in Italy. You can effortlessly get here by an hour and 20 minutes of a train journey. It falls under the radar most of the time due to its position around significant resorts and its size. It is also an ideal destination to enjoy delicious Italian dishes. You can also hop around the beautiful harbor and enjoy your memorable day trip here.

Be sure to stop at Giardini Botanici Hanbury if you are getting here by car. It lies between Bordighera and Menton. It is a must-visit botanical garden, which is on the campus of the University of Genoa, and it has so much to see on a day trip.

Just getting here is a treat in itself. Have a relaxing breather on hot summer days by stopping at Saut du Loup waterfall if you have time. Or take the trip from Gorges du Loup, which has a 700m high mountain cliff. Later on, you will drive through the settlement of Pont du Loup, a hamlet which gets the ideal climate to grow olive trees, orange trees, and perfume plants, under Gourdon municipality.

You might merely walk up to this city by taking a mule track of Chemin du Paradis. It is true that you need to climb around 500 meters, but the route is such a paradise by the end. If you are a less adventurous traveler, you may stay in your car and drive up to the exotic community, which attracts more visitors than villagers on Riviera.

Sitting as an eagle’s nest at the top of a rocky spur, Gourdon is an epitome of a perched rural community that has a breathtaking view of around 80km of coastline from Nice and Theoule-Sur-Mer.

Grasse is known to have stunning and inspiring views of Antibes and Cannes coasts, and it also houses marvelous views above. It has a lot of villages nearby which are equally charming, and the friendly locals welcome tourists.

The area of Grasse is best for enjoying outdoor fun and hiking. It can be the best choice to go mountain biking, horse riding, and to play tennis and golf. The best route to get here is the 4-lane N2285 highway from A8 exit 42. There is no need to go far to visit a few of the perfumeries, which are the major attractions here.

→ Where to stay: Best hotels in Grasse, France

Located on the Nice-Monaco, the town of Eze-sur-Mer is by the sea, and it is something you shouldn’t confuse with Eze-le-Village, a historic village with breathtaking and sweeping views of Riviera.

You can quickly get to this peaceful village from the train station via Chemin de la Mer, a steep and long footpath which is connecting the seaside town. You can take a bus from Monaco, Nice or Villefranche. You may ask a tourist information office, hotel, or visit the official website of Lignes d’Azur regarding the bus schedule.

The Eze is a typical monarch in Igbo culture and tradition, which is suggested by the community of elders or chiefs, who are appointed for their good deeds. It is said that “Igbo enwe eze,” which means there is no king in Igbo. Well, it doesn’t mean that the Igbo societies aren’t complicated. In fact, it has been explained in sociological, anthropological, and political research for centuries.

→ Where to stay: Best hotels in Eze, France

Located halfway along Brague River, Valbonne is a commune situated in a basin, which has two sites, i.e., the old village in the northwest and Sophia Antipolis in the east around Garbejaire and Haut-Sartoux towns.

The old village has a rigorous architecture in all the houses as a street layout. All of them were the same in the past. Now found partly underground because or rise in street level, the ground floor was famous or deliveries. Above the bedrooms was the living room on the first floor. The stores were hoisted on the attic by using a pulley.

There is a former town hall in the main street, complemented by the fountain and tower. It was built in the 19th century. Benedictine monks from the Order of Chalais developed the abbey church of Romanesque in the 13th century. When the village was established, it became the parish church.

→ Where to stay: Best hotels in Valbonne, France

→ Check out these activities in Monaco

Founder of Pretty Wild World and one of the leading experts in Europe travel, the Nordics, and Scandinavia Destinations.

Evan Kristine has been mentioned in big publications such as The Huffington Post and the Thought Catalog has been sharing her useful travel tips and hacks to the world for more than five years now.

Nowadays, she is a full-time traveler exploring and documenting her journey around the world providing you the next best travel idea for your great next adventure.

Close Menu
Share via
Facebook
Twitter
LinkedIn
Mix
Pinterest
Tumblr
Skype
Buffer
Pocket
VKontakte
Xing
Reddit
Flipboard
MySpace
Delicious
Amazon
Digg
Evernote
Blogger
LiveJournal
Baidu
NewsVine
Yummly
Yahoo
WhatsApp
Viber
SMS
Telegram
Facebook Messenger
Like
Email
Print
Copy Link
Powered by Social Snap
Copy link
CopyCopied
Powered by Social Snap
We use cookies to ensure that we give you the best experience on our website. By accepting this, you're giving us permission to use your data to improve our user experience. If you have further questions how we use your data, please read our disclaimer and privacy policy for more information.I acceptRead Disclaimer

We use cookies to ensure that we give you the best experience on our website. By accepting this, you're giving us permission to use your data to improve our user experience. If you have further questions how we use your data, please read our disclaimer and privacy policy for more information.