Top 10 Awesome Things to do in Zadar (Croatia)

Discover some of the best things to do in Zadar, one of the gems and a must-visit destination in Croatia! Here are our top ten must not miss activities.

The city of Zadar is situated in the northern part of Dalmatia, right in the middle of the beautiful Croatian coast, almost as a heart of it. It is a museum in open space, with artifacts from different ages, cultures, traditions, and influences that co-created it. It is my honor to represent you this stunning city and ultimately propose you a list of 10 top things to do in Zadar.

The city enjoys a pleasant and mild climate, a rich Mediterranean flora, the sea that’s so pure and turquoise, and faces rows of beautiful islands in front. With the fast development of tourism in Zadar, it became a must-see in an itinerary of basically every tourist who questions himself what places to see in Croatia.

Zadar finds itself in a group of the oldest cities on the Adriatic Sea with a history of merely 3000 years. The first one who decided to settle down in this area was Liburnians, a long, long time ago – in the last millennium B.C.

The Old town was built on a small peninsula, which is quite tiny – it covers the surface of approximately 0,3 km2 (1000 meters long and 300 meters wide). The Old town has maintained the grid of the plan of the Roman colony; hence you probably won’t have a problem reading the city map. Romans ruled in Iader (the Roman name for the City) till the 5th century. Still, unfortunately, by the time Croatians got in the city (around the 8th c.), a lot of monuments were destroyed, either by brutal attacks or a massive earthquake.

Starting from the year 1000, Croatians struggled a lot with Venetians who saw in Zadar a port/useful point on their way to the East. Zara (the way Venetians called it) fought back vigorously when finally in the 15th c. Zadar and the whole Dalmatia were sold to Venetians. There starts the period of economic and social stagnation, where Zadar (and every other city in Dalmatia) was – in one word – a fortress, defending from Ottomans not only Venice and West Europe but also preserving Christianity over Islam.

The times under Austro Hungarians were, in general, a real refreshment – the Old town assured its cultural, social, and mundane status with luxurious cafes, sophisticated theaters, beautiful open spaces for promenades. WWII brought one of the greatest catastrophes – 60% of Old town surface was demolished in the bombing by the Allies. But yet, Zadar arose once again, like a phoenix from ashes. After a Yugoslav period, Zadar has finally become a city of independent Republique of Croatia.

I have to admit, I had a hard time to pick just ten things to do in Zadar. Not because of it’s size, but its rich cultural heritage and today’s touristic offer. But, okay, cutting the chase – finally, there they are:

Experiences and top things to do in Zadar

The two modern installations, Greeting to Sun and Sea organ, have won the hearts and minds of both citizens and tourists. Architect Nikola Bašić conceived the “sisters” installations in 2005. Those are a tribute to the sunset, to nature and its beauty and force.

Greeting to Sun represents a solar system on the pavement and the circles that stand for Sun and planets being equipped with photovoltaic modules that absorb solar energy. Only after the sunset, they begin to produce a light of incredible nuances and rhythm that reminds a lot of waves making an unforgettable experience.

A few steps from Greeting to Sun, you can find the Sea organ. Its uniqueness and beauty will call you, again and again, to come, sit there on the steps, relax and enjoy. Sea organ is 70 meters long part of the waterfront consisted of steps that slightly descend to the sea. Below these steps, you can find pipes – the music depends on the currents of waves and their strength.

If you don’t believe me, I guess a word of a world-famous Alfred Hitchcock should convince you – “Zadar has the most beautiful sunset in the world, more beautiful than the one in Key West, in Florida.” If you visit Zadar tourist attractions during the summer, you should take your place on time, so to admire the sunset and enjoy the miracle of sea music because it can get crowded.

READ ALSO:  Top 16 Things to do in Zagreb (Croatia)

The biggest Forum on the Eastern coast, Forum in Zadar, had been built from the 1st B.C. to 3rd B.C. Unfortunately, we can admire it only from a scheme that you can find near the Forum. Today you can see the original pavement, foundations of taverns, and the fragments of ancient architecture.

Placed on the pavement of the ancient Forum, the church re-used the fragments of the Romans’ main square. It’s a symbol of the city; you should visit inside (paying entrance) the medieval church and realize its greatness.

At the beginning consecrated to Holy Trinity, after the 15th c. it was named after a Bishop Donat who gave it built in the 9th c. Deconsecrated in the 18th c, today usually concerts are being held because of its outstanding acoustic characteristics.

READ ALSO:  Top 17 Things to do in Split (Croatia)

Cathedral and a view from the bell tower

Consecrated to St Stosija (Anastasia – one of the patron saints of the City), it is the largest cathedral in Dalmatia. On that very site, an early Christian basilica had stood, which kept broadening over centuries till it finally gained its actual size in the 13th c. in Romanesque style. Plain yet majestic, its interior evokes particular serenity.

For those who aren’t afraid of heights, I warmly recommend to check out the view over the Old town from the bell tower.

Church and especially a sarcophagus of St. Simon

St. Simon, the most popular saint in Zadar, found his shelter here. Literally. The silver sarcophagus contains the remains of the Saint; that way, and numerous Christians come every year to celebrate the Holy Mass; they witness the opening of the chest and pray to their patron.

As Queen Elizabeth did, so the legend says, in the 14th c. when she gave the sarcophagus to be made, praying to have at least one son who would continue the family name. It is an extraordinary piece of medieval art with sophisticated details and, at the time, high-quality representations of some parts of the City.

Kalelarga and the Main square

Well, what’s there to say? Anyone who wants to see and be seen, won’t miss this promenade on the most important street of Zadar. Kalelarga (Calla Larga = broad, wide street) was traced on the same position and direction (E – W) by Romans and remained throughout the centuries the road that divides the peninsula into two practically equal parts.

So, take your time, walk by the modern shops and cafes on Kalelarga till you arrive at the Main Square. There, you can admire two Venetian buildings from the 16th c., one facing another. Or, enter the cafe “Lovro” where you’ll find a small church dating from 11th c. (yes, a church within a cafe! And no, it’s not common for Croatians to build churches in cafes. It’s just a cute story).

READ ALSO:  Top 10 Things to do in South Dalmatia (Croatia) 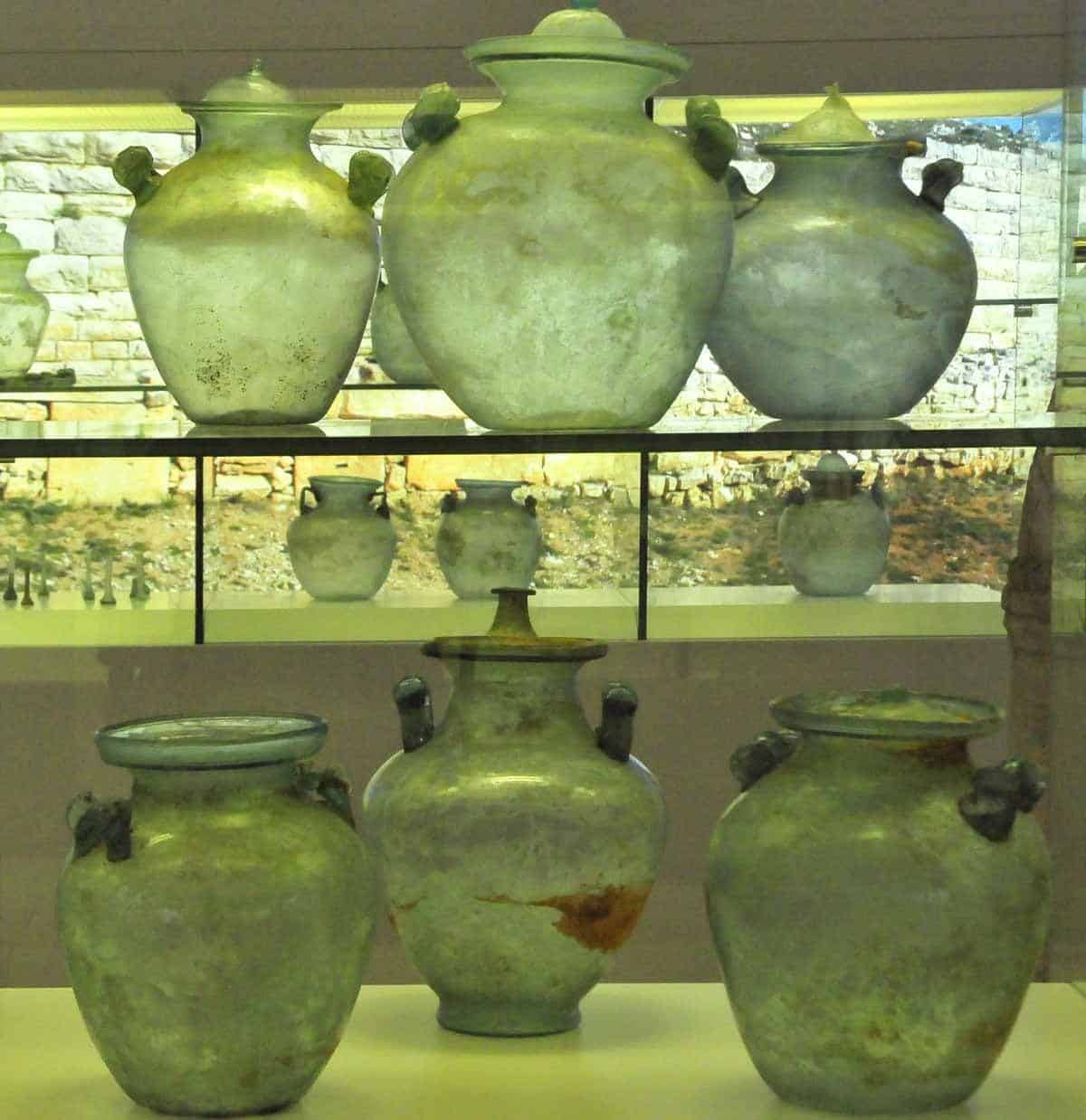 The recently opened museum has, without bragging, the most fabulous collection of ancient glass in this part of Europe. It’s housed in a palace that dates from the 19th c. right on the eastern part of the City walls and offers a unique experience to the visitors.

It guides you through the history of glassmaking with all kinds of ancient glass tools that were buried in their funeral rituals: from bottles, jugs, cups, plates to jewelry and cosmetics accessories that were once part of Roman day-to-day life. Two words: mind-blowing!

READ ALSO:  Top 14 Things to do in Dubrovnik (Croatia)

Well, you have to eat especially after visiting all of the things to do in Zadar. Eventually. So why not visit the part of the Old town named Varos, where you’ll find cozy restaurants with typical Dalmatian food. The gastronomy in Zadar is Mediterranean style: seafood (fish, shell, octopus) lots of olive oil, vegetables, wine, goat, and sheep cheese. Joined by traditional music on Friday nights (during summer) is an exquisite experience that most tourists wish to repeat.

READ ALSO:  Top 10 Cool Things to do in Istria (Croatia)

Still in gastronomy and not to miss – Zadar has a fantastic liqueur made of cherries, but extraordinary ones that grow in the hinterland of Zadar and cause of the specific weather conditions they contain more bitter and are called Maraska. Maraschino has a long tradition, and quite fascinating history – lots of European courts had it delivered, and supposedly it was found on Titanic.

Foša or the Land Gate is the most magnificent monument that Venetians left on our coast. Dating from the 16th c., at a time, it was the only entrance in the city by the land.

The most beautiful view you can catch from the park of Queen Jelena, right on the side of this outstanding monument. It’s also pleasing to see the whole eastern part of Great City walls that have been preserved.

→ Check out these activities in Zadar