Most of the travelers in Croatia head to the stunning, long coastline and the capital city of the country, Zagreb. It has a lot of attractions that you have ever wanted to explore in day trips from Zagreb. It houses a quarter of the population of the nation. It is the cultural and political hub of Croatia, and it is a dynamic, thriving island with some of the best museums, shopping centers, and restaurants of the nation.

A lot of the major attractions are in the heart of the city, which includes two major attractions, such as Donji Grad or Lower Town and Gornji Grad or Upper Town. Gornji Grad houses parliament building and Zagreb’s Cathedral and is positioned on a high plateau while Donji Grad has more modern attractions, museums, and Croatian National Theatre. The Trg Bana Jelacica is the best place to start your day trip from Zagreb, where the Lower and Upper Towns meet at the main square of the city.

Visit the 295km long and wide forest reserve, Plitvice Lakes National Park in the heart of Croatia! It has a range of sixteen lakes and waterfalls. Here, the walkways wind across and around the water, and the ferry of Lake Kozjak links the lower and upper lakes.

With the day trip to Plitvice Lakes from Zagreb, you can visit the famous and appealing lakes joined by several streams and walk along the winding lanes across the river. It houses the stunning ancient woodlands to explore the panoramic views.

The harmony and concord of sixteen breathtaking lakes in Plitvice are famous not just in Croatia, but also across the world. Due to this reason, this coveted national park is listed as a UNESCO World Heritage Site. Here, you can enjoy the walk through magical and ancient woodlands where it first takes you through Upper Lakes, which has twelve different lakes split by travertine barriers.

Read also: 26+ Best National Parks in Europe You Must Check Out!

By taking a day trip from Zagreb to Ljubljana, you can explore the breathtaking serenity of Lake Bled as well as its captivating prehistoric castle. It is recommended to have a walk to witness the top sights of Ljubljana and a short ride to Ljubljana Castle.

The capital of Slovenia, Ljubljana, is a sleepy yet whole-hearted city that will captivate your heart. Witness the quirky bridges and different types of architectures with carved dragons. Take a tour guide to accompany you on a relaxing walking tour and who will introduce you to all the incredible parts of this Slovenian gem.

At Ljubljana Castle, you will finish your overall tour to Ljubljana, where you can take a 60-second fun ride to reach the castle. You can have free time to have lunch while enjoying the breathtaking views of the city.

Keep enjoying your tour to Lake Bled at this fascinating historic castle, which was built in the 11th century. A cliff is perched over 130 meters atop the glacial lake. It is the heart of Slovenia and Bled. The rocky islet houses the breathtaking views of the Church of the Assumption of Mary, the Julian Alps, as well as its nearby tranquility of nature. Here, you will get close to the lake and enjoy a quick walk to explore the more captivating vistas of nature.

→ Where to stay: Best hotels in Ljubljana

Read full blog post: Top 10 Things to do in Ljubljana

Croatia has no lack of exotic coastal resorts which allure the vacationers when they get here for a great day trip from Zagreb. If you want to explore the outskirts of the city, Samobor will never let you down. Dates back to the 13th century, this ancient town is well known for its narrow and quaint cobblestone streets and a beautiful central square of Trg Kralja Tomislava, along with the abandoned leftovers of the fortress, Tepic Hill, called as Stari Grad.

Samobor is a popular getaway hub for hiking lovers, and it is well known as one of the best destinations to enjoy the delectable Croatian cuisine. It is also the hub of Samobor Carnival, which is held every year since the 1800s in January and February. The Trakoscan Castle, a well-preserved architectural landmark, is a notable attraction built in the 12th century, known for park-like landmarks and long and high walls.

Read also: Top 16 Things to do in Zagreb

Located on the north meander of Bosut, where the left bank was secured from constant floods and is suited for colonization, Vincovci has a favorable position and is an area on which cultures have once inherited from Stone Age to modern ages.

The town has continuously been inhabited for around 8000 years. A lot of its prehistoric landmarks were located on the high bank, and the longest and largest settlement formed on the right confluence of Ervenica.

The Trakošćan Castle is positioned in northern Croatia. It was made in the 13th century within the northwestern fortification system of Croatia, as a small fortress with an aim to monitor the road passing through Ptuj and Bednja Valley.

Legend had it that Trakošćan was named after Arx Thacorum fortification and alleged to stand in the same position in antiquity. According to another source, it was named as a tribute to the Knights of Drachenstein, who had been in control of the region in the Middle Ages.

→ Where to stay: Best hotels in Trakošćan

The fourth-largest city in Croatia, with 108,048 residents, as of 2011, Osijek is the cultural and economic hub of the eastern Croatian region of Slavonia, along with the administrative center of Osijek-Baranja County. It is positioned well on the right of the Drava River. It is only 25km upstream of its convergence with the Danube.

Get here for several events to experience the culture of the city all year round. Croatian Tambura Music Festival is one of the most important festivals; it takes place in May.

→ Where to stay: Best hotels in Osijek

The town of Đakovo is positioned on the railway route from Osijek and Doboj in Bosnia and around E73 Highway. This town is small enough to complete your journey with a walk, and it gives ample chances to explore the sights to behold. The town is well known for its imposing, large-scale Cathedral. On the edge of the city, you can have a great view of Lipizzaner horses, which are trained every morning.

Located around 1035m of altitude, Sljeme is the highest peak in Medvednica mountain of Central Croatia. It is located north of Zagreb, and it marks the south border of the Zagorje historic region. Most of its area is a nature park, a kind of preserved landscape which is lesser as compared to a national park.

The park spreads over 228.26 sq. Km and forest stretch over 63% of the area. The mountain was an island in the Pannonian Sea during Pliocene and Miocene.

It is a small town positioned in northern Croatia, and it is also a cultural and administrative hub of Krapinsko-Zagorska county, placed around 55km from Croatia’s capital, Zagreb. The city is reportedly dated back to 1193, but its history is even longer.

Travel back in time at the Neanderthal Museum and explore the rich history of the town. Learn all about the culture, anatomy, and environment of the Neanderthal. The museum is strategically located in situ. You will also learn about the man who discovered the epochal habitat, Dr. Kramberger.

At the museum, you will be able to explore all multimedia content. It is the best place to explore with your kids and family. It is an impressive museum, which is the most visited one in Croatia.

→ Where to stay: Best hotels in Krapina

One of the most prominent tourist destinations of northern Croatia, Varaždin, is the old town. It has various museums, collections, and galleries along with Varaždin cemetery, which is secured as a horticultural monument.

It is positioned on the right of the Drava River in northwest Croatia and is 79km from Zagreb. The most prominent attraction here is Entomološka Zbirka at the early Classicist Herzer Palace in the heart of the town.

→ Where to stay: Best hotels in Varaždin

Kumrovec is merely a small village in the north of Croatia, and it belongs to Krapina-Zagorje County. It is on the bank of Sutla River, near the border of Croatia and Slovenia.

It is known for being the birthplace of Josip Broz Tito (1892-1980), a marshal and the president of Yugoslavia. His birth house became the Memorial Museum of Marshal Tito in 1953. The bronze statue of Tito is another major attraction.

Other Details You Should Know about Zagreb

How many days should I spend there?

You can explore the top attractions of the city during your three-day visit. You may want to add extra one or two days if you’re going to spend some more time in the lap of nature at Lake Jarun, where you will find a lot of outdoor activities to get the most of your trip.

How to get there?

It is not that easy to explore the center to the fullest with only two feet. You will love the user-friendly tram, which adds convenience to travel through the center. You may take the tram to Lake Jarun from 5 to 7.

Be sure to stay in Donji Grad (Lower Town) or Gornji Grad (Upper Town) to have the best sightseeing adventure by spending one day in Zagreb.

→ Check out these activities in Zagreb 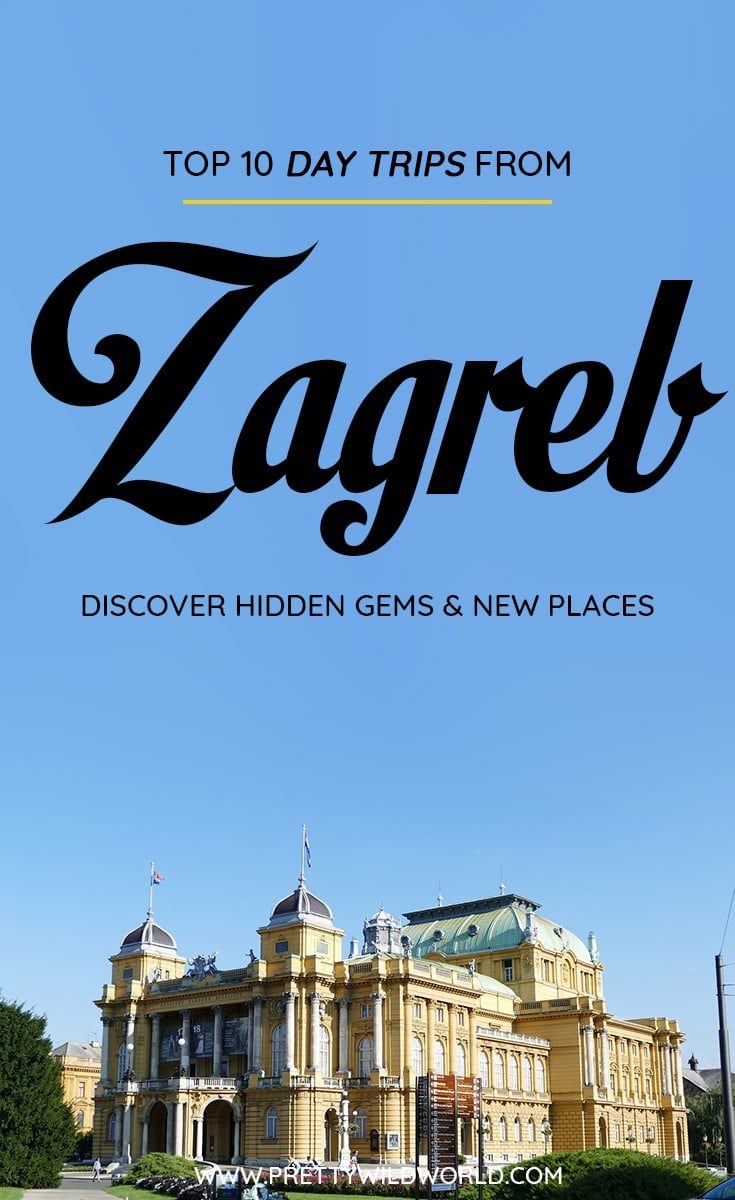