Known for its beautiful and unique architecture and lush beaches, Santorini has been one of the top destinations in Europe. That said, you must not also miss out its neighboring town and villages thus going on a day trip from Santorini is a must not miss experience!

Santorini is an exotic volcanic island positioned around 120 miles off the south of Greece. With its sunny weather and crystal, clear waters make it one of the world’s well-known tourist destinations, which invites tourists from all over the world. Located along the volcanic slopes, the whitewashed houses add to the ideal backdrop of its natural scenery.

The island belongs to the Cyclades archipelago and has a rich history from the Bronze Age. It is an ideal gateway that is positioned away from the daily stress of city life. From families to romantic couples looking for seclusion and a peaceful break from the hustles and bustles, and the monotony of city life, Santorini is an ideal escape for the tourists. It has a lot of beaches and villages for tourists. Here are some of the day trips from Santorini.

Lies on the coast of the Mediterranean Sea between the Libyan Sea and the Sea of Crete, Crete is the largest Greek island in the south of Peloponnese. This island is around 60km wide and 260km long. It has four prefectures, including Rethimno, Chania, Lasithi, and Heraklion.

Crete would surely be one of the favorites if there were a competition between Greek islands for beauty. In fact, some tourists say Crete is the only heaven on earth. This view is enough to inspire you to plan your day trip from Santorini to Crete. With a population of over 650,000 residents, Crete is not all about sea, sun, and sand. It is a distinct destination loaded with warmth, vitality, culture, hospitality, and excellent infrastructure.

Well, a day trip to Crete from Santorini is known for its beaches and seas. The island is stretched from fertile plains of the coast to rugged hills, and from bustling metro cities to the serene and peaceful hillside villages.

Read also: Top 14 Things to do in Santorini

The cosmopolitan city of Mykonos is one of the widely recognized Greek islands and Mecca for travelers. It is among the most visited tourist islands in the Aegean.

If you are planning a day trip to Mykonos from Santorini, expect loud pubs and discos. You can have an English breakfast, which includes some bacon, eggs, a few rolls of butter, and some costly merchandise. It is more expensive than the various islands in Greece.

The windmills here are dated back to the early 16th century. The island was a major producer of bread and wheat. It also has pleasant views of Little Venice, and it is one of the best places for a day trip from Santorini to Mykonos.

The notable Cyclades Island, Paros, is flocked by tourists during summer who are heading to Santorini and Ios. This Greek island is located around Naxos, and it is one of the well-known holiday destinations for tourists. It is the second-largest island here as it is spread over 196 sq km, and its coastline is around 120km long.

It is centrally positioned around Ios, Naxos, Syros, and Sifnos. A lot of ferries stop first at Paros heading to Santorini and Naxos. It stands third for being the most famous island of the group, followed by Santorini and Mykonos. It is known as one of the most idyllic islands in the Cyclades group. It has a lot of exquisite beaches and villages.

Also, visit the church of 100 doors, Panagia Ekatontapiliani in Parikia, closely located to the harbor, which is a monument dated back to the 4th century and rebuilt after a 1773 earthquake. Initially, it was built by the mother of St. Constantine, St. Helen.

The Greek island of Ios belongs to the group of Cyclades Islands in the south of Greece. It is located only a quick ferry ride from Santorini. It is the best choice for day trips from Santorini and even an extended holiday. Ios has become an island that has something for the tourists of all ages over the past couple of years. It was a party island for many years. But today, there is a lot more to please the tourists of all ages.

In various surveys, it has always been voted for having some of the top 10 European beaches, and it has turquoise coastlines and sandy beaches spread over 75 km. Typically, Ios has Cycladic architecture as it houses whitewashed complexes perched well on hills, and it is dotted across the valleys. You can still find the bustling nightlife in Ios, something you will not see on other islands. The nightlife here is focused on only one place, Hora, unlike package resorts.

It has a very cosmopolitan nightlife, which is still traditional. The main square is the meeting point here. Hora is a serene and tranquil Greek village where you can find the locals playing backgammon and chatting in cafes. If nightlife is not your cup of tea, Chora is peaceful and exciting when you visit in the early evening and awash with jewelry and clothing stores, great restaurants, and souvlaki shops.

The Port of Yialos is a great place here to get rid of the crowds during the evening. Getting there is also very easy on your trips from Santorini, Greece. You can visit various places on other beaches through regular ferries and buses where you can explore the peaceful areas and skip the crowds. It has something to offer for people of all age groups. This island is gorgeous and provides an unmatched experience to the tourists.

Naxos is the most fertile and the largest island in the Cyclades. Agriculture is the primary source of its revenue rather than tourism. Hora is the central town here, also known as Naxos Town, which has most of the restaurants and shops visited by tourists.

Along the coast, a lot of beach communities extend from Hora. Portara is the most sought-after landmark of Naxos. It is an iconic landmark built in the 6th century BC gated on the Palatia islet in Naxos harbor. It is famous for its exotic beaches, where you can enjoy kite-surfing and windsurfing. Most of the West Coast of the island is sandy and long with azure and crystal clear waters. It has a great interior with different villages and valleys that are easily accessible by road.

Anafi is still untouched by mass tourism, unlike its volcanic sibling. If you get there, you will not find dazzling nightlife. It is the best place for a laid-back holiday. Legends had it that Anafi was created by Apollo, an ancient god as a gift to Jason, due to which an alternative derivation has emerged. It is the ultimate place for recreation, instead of being a place for sightseeing. There is not much to explore here, but it still has a few destinations that are worth a visit.

The Zoodchou Pigis Monastery, on the east of the island, is a serene and small monastery devoted to the Virgin Mary. A road links the monastery and Hora. When heading to the monastery, Kastelli is an ancient and pre-historic settlement, and there are just a few ruins that are left here. It still has great views of the sea.

One of the most fertile and largest Greek Islands, Rhodes, is one of the most frequented tourist attractions as it has a combination of archeological sites, beaches, and an extensive medieval town. It is known to have a suitable climate, and it usually receives sunny and mild weather. Usually, it is known as one of the Dodecanese.

It has a prolific rock-rose named as the Island of Roses. Most of the modern scholars still confuse its ancient theory that its name is derived from a rose. The northern coast of the island is known for its bustling tourist resorts. It has a slower, simpler pace of living and offers tranquil beaches.

Read the full blog post: Top 10 Things to do in Rhodes

Are you looking for a serene and spectacular Greek Island where you can escape from the holidaymakers and package tours? Folegandros is the best place to go to. It is less about package tourism, mainstream tourist-friendly amenities, and wide roads, and more for those looking for an island where they can find peace and seclusion.

You can’t find organized water sports, wild nightlife and discos here and you will never be disappointed. After all, the lack of nightlife doesn’t mean a lack of excellent cafes and restaurants on a quiet island. Walkthrough the hills in peace, smell the wild thyme, a range of vivid wildflowers, and oregano in the spring.

There is nothing better on this island than tasting some good wine and having a nice meal. The cuisines here are not gentrified yet like on its nearby islands. Getting here is also easy: you can take the ferry Flying Cat III to arrive there in 45 minutes from Santorini. 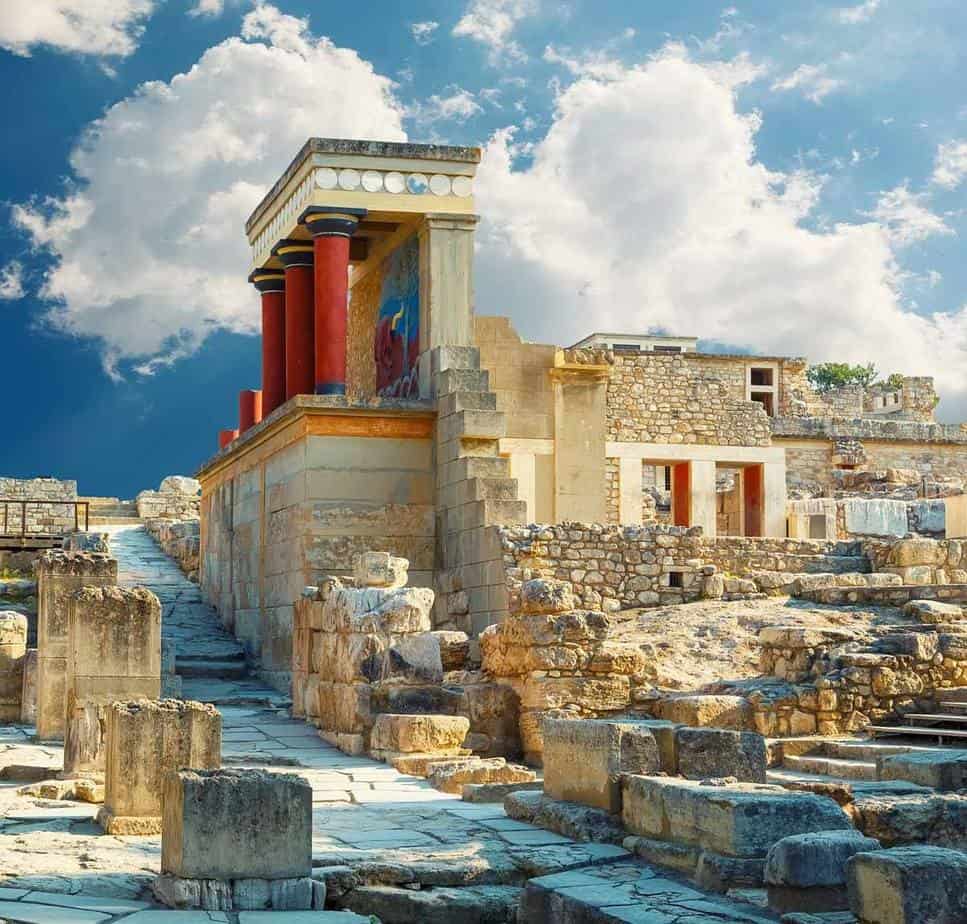 It is the capital of Crete, the largest Greek island and the principal city here. The archeological museum of Heraklion holds the ruins of the Minoan empire; a 3000 years old civilization grew around the Minotaur fame, the legendary palace of Knossos, along with well-preserved Venetian wall, Byzantine churches, and the 15th-century fortress.

It receives a mild and favorable Mediterranean climate. It receives hot and dry summer with clear skies. The seasonal breezes often relieve dry and warm days. Here, winters have little rain and are mild with rare frosts.

Founder of Pretty Wild World and one of the leading experts in Europe travel, the Nordics, and Scandinavia Destinations.

Evan Kristine has been mentioned in big publications such as The Huffington Post and the Thought Catalog has been sharing her useful travel tips and hacks to the world for more than five years now.

Nowadays, she is a full-time traveler exploring and documenting her journey around the world providing you the next best travel idea for your great next adventure.

Close Menu
Share via
Facebook
Twitter
LinkedIn
Mix
Pinterest
Tumblr
Skype
Buffer
Pocket
VKontakte
Xing
Reddit
Flipboard
MySpace
Delicious
Amazon
Digg
Evernote
Blogger
LiveJournal
Baidu
NewsVine
Yummly
Yahoo
WhatsApp
Viber
SMS
Telegram
Facebook Messenger
Like
Email
Print
Copy Link
Powered by Social Snap
Copy link
CopyCopied
Powered by Social Snap
We use cookies to ensure that we give you the best experience on our website. By accepting this, you're giving us permission to use your data to improve our user experience. If you have further questions how we use your data, please read our disclaimer and privacy policy for more information.I acceptRead Disclaimer

We use cookies to ensure that we give you the best experience on our website. By accepting this, you're giving us permission to use your data to improve our user experience. If you have further questions how we use your data, please read our disclaimer and privacy policy for more information.