Here is a comprehensive compilation of the must-visit small towns in Norway for a fun-filled and meaningful experience.

With its unrivaled natural beauty, Norway is one of the best places to visit, not just in Europe but in the whole world. Who would not fall into sheer amazement seeing its gorgeous fjords, scenic mountains, and towering waterfalls?

Nothing beats hiking its wilderness and experiencing wonderful memories at ultimate extravagance. Many tourists acclaim that the country has it all when it comes to natural wonders. It’s a perfect getaway for thrill, fun, and adventure.

But that’s not all. Norway is also one of the happiest countries on earth, and one could just stroll around to know why.

Take a walk to these small towns in Norway and glimpse the way of life that makes this country one of the best to live in. That’s also an excellent opportunity to learn about its rich culture and history.

The small town of Lillehammer hosted the Winter Olympics in 1994, giving it an important historical role. From here, one catches breathtaking views of Lake Mjosa, Lagen River, and the snow-capped mountains. Many 19th-century wooden structures remain in town, and these are ideal spots for those who wish to learn about the town’s rich history.

Because of its ideal location, the town is a popular site for skiing. Don’t miss visiting the Perfect Escape, which has three sections that will lead tourists into the Bank of Norway and rescue gold. It’s one of the best small towns in Norway.

Image by Neil Morrell from Pixabay

Undredal lies along the famous Aurlandsfjorden, one of the most scenic in the country. It is a tiny town with only 100 residents and 500 goats. The town is known for its Geitost, a type of brown goat cheese, which the locals have been producing the traditional way for centuries.

It also hosts the Undredal Stave Church, the smallest of its kind in Northern Europe, and is a popular pilgrimage site. Tourists coming here should try the town’s unique goat sausage. They can access the town either via boat or vehicle.

CHECK THIS OUT:  From Bergen: Nærøyfjord Cruise & Traditional Lunch in Undredal Tour

Dubbed as the “Homeland of the Viking Kings,” Haugesund lies on the country’s Western Coast. For centuries, it served as the center of many Vikings and their rulers. It is surrounded by all the natural wonders Norway is known for, including breathtaking fjords, cascading waterfalls, vast seas, and steep mountains.

Have your kids learn about Viking culture when they dress real Viking costumes. Check out Akrajord, one of the most picturesque waterfalls in the world. Tourists can also ride a boat to explore the nearby islets.

They can also participate during one of the several festivals the town hosts every year. Among these are the famous Sildajazz Festival and the Norwegian International Film Festival.

CHECK THIS OUT: From Haugesund: Åkrafjorden & Langfoss Day Trip

Flekkefjorden can keep tourists busy for days or weeks because of its endless array of attractions and activities worth experiencing. The town’s name comes from an adjacent fjord called Flekkefjord.

One of its must-try activities is riding a trail bike, which leads to 17 tunnels and vantage points for breathtaking views of the town. One can also hike to the potholes of Brufjell Caves or explore the Dutch Quarter. There are also some high-end niche stores where visitors can indulge in a luxury shopping spree.

INTERESTING READ → Do you want to know some interesting facts about Norway? Read this post!

Located on the largest island of Norway, Harstad’s town is touted as the country’s cultural capital. Tourists can easily reach it from around the major cities. It’s one of the very few locations which offer extraordinary views of the mystical Northern Lights and the Midnight Sun. The town is also ideal for activities such as skiing and hiking.

Tourists can ride a ferry or a bike to explore Hastad’s natural wonders, including its sandy beaches, rugged mountains, and beautiful coves. They can then proceed to immerse with the historical communities or catch stunning sights from the Kittiwake Cliff.

Dating back to the Bronze Age, Narvik’s little town nestles on the shores of the beautiful Narvik Fjord. It hosts Norway’s best location for alpine skiing in the country’s northern part. The Vikings once settled in the area, thus, one can see remnants of this mighty group. Tourists can ride a cable car to Fagernesfjellet to catch a bird’s eye view of the snowy mountains.

Check out one of the largest drop heights in Scandinavia at Narvikfjellet, Narvik’s town resort. It is also one of the best viewpoints for the Northern Lights during winter, late autumn, and early spring. Don’t forget to see the Narvik War Museum and the Freedom Monument learn about the town’s war history.

Geiranger is one of the beautiful small towns in Norway. via Wikimedia Commons| Mariordo

Nestled in the western part of the country, Geiranger hosts around 250 residents. Because it lies at the head of Geiranger Fjord, tourists are assured of some of the country’s best views when they come here. In fact, the Lonely Planet dubbed this little town as the “best travel destination in Scandinavia.”

The town’s western point offers a breathtaking view of the majestic Seven Sisters Waterfall, which cascades opposite to another towering waterfall called “The Suitor.” Every year, thousands of tourists visit the town as it also hosts the third largest cruise ship port in Norway.

CHECK THIS OUT: From Ålesund: Private Day Trip to Geirangerfjord Tour 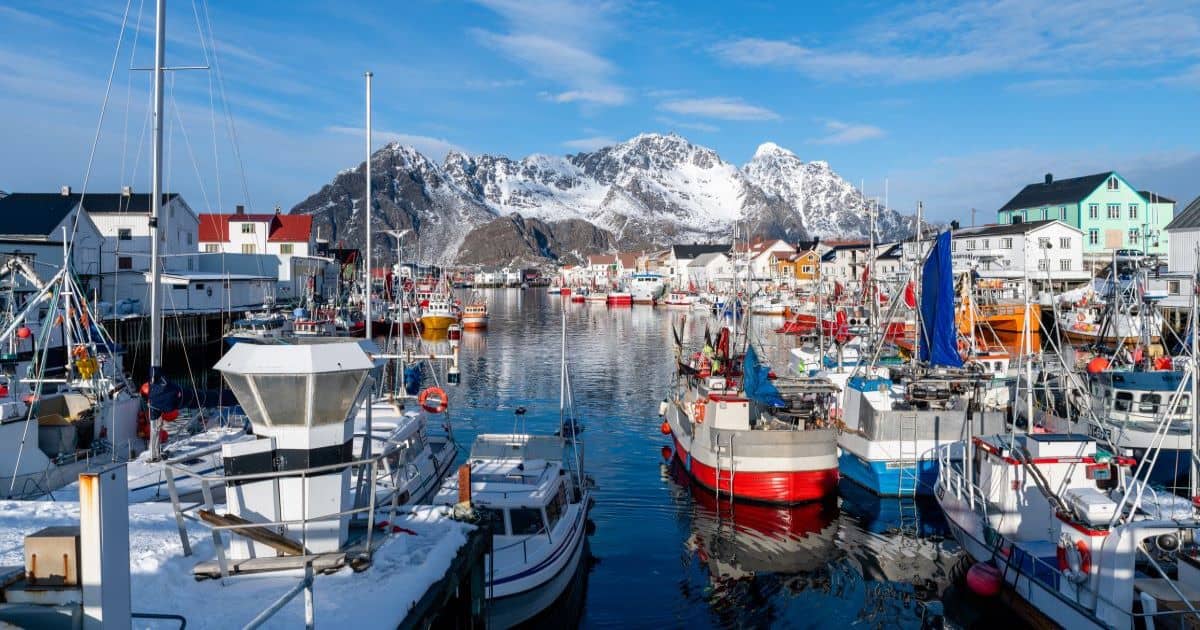 Henningsvaer consists of several islands which form the Lofoten archipelago. The locals here rely mainly on fishing for both subsistence and commercial activity. The islands are known for colorful and traditional Norwegian houses lining their coastlines. Among the popular activities here are mountain climbing and diving.

The town is also home to numerous art galleries and picture-perfect vistas. Among the must-see attractions are the Kaviar Factory, Vagakallen mountain, and the Galleri Lofotens, which is both a gallery and a museum.

Skudeneshavn, also known as Skudenes, is considered as one of the most well-preserved little towns in the country. Tourists will have a memorable glimpse of white wooden houses dating back in the 1800s and the annual boating festival called Skudefestivalen. It is the biggest assemblage of coastal culture in Norway’s western region.

Different kinds of boats such as vintage boats, modern boats, and old wooden boats congregate on the surrounding waters during this occasion. Skudenes is one of the best small towns in Norway every tourist should visit.

Located in the Svalbard Islands, Longyearbyen is considered the northernmost settlement in the world. It is known for its permanently frozen ground with snow ranging from 10 to 40 meters deep. Every four months of the year, the town becomes devoid of sunlight.

That is why the locals stage the weeklong festival called Solfestuka as they anticipate the sun’s return. Tourists visiting here can have a chance to witness the midnight sun and to dine at the world’s northernmost restaurant, Huset.

Check out these activities in Norway

Do you want to travel around Scandinavia? Start here!

Can’t decide where to go? Check out these posts!

Useful guides to get you started